Though the career of Ross Youngs was ended prematurely, he made an impact on the baseball world during his 10 seasons in the big leageus.

Youngs made his major league debut in 1917 with the New York Giants. His first full season came in the following year when he was sixth in the league with a .302 batting average.

The left-handed hitter finished his career with a .322 lifetime average and batted over .300 for seven straight full seasons, reaching an average of better than .350 twice. He scored 100-plus runs on three occasions and led National League right fielders in assists five times.

Youngs had his best season in 1920 when he finished second in the NL batting race with a .351 average. At just 23 years old, he collected 204 hits, scored 92 runs, had 27 doubles, 14 triples and six home runs. He also notched 78 RBI and walked 75 times. He had a .427 on-base percentage and was third-best in the league with a .477 slugging mark. On May 11 of that season, Youngs had three triples in one game against Cincinnati, tying a major league record.

Youngs helped his team get to the World Series four years in a row, from 1921 to 1924, and the Giants won the Fall Classic twice – in 1921 and 1922. He became the first player to get two hits in one inning in a World Series game in 1921 with a triple and a double in the Giants’ eight-run seventh inning in Game 3 against the Yankees.

A plaque was installed at the Polo Grounds in 1928 to honor him.

“A brave untrammelled spirit of the diamond, who brought glory to himself and his team by his strong, aggressive, courageous play,” the plaque read. “He won the admiration of the nation’s fans, the love and esteem of his friends and teammates, and the respect of his opponents. He played the game.”

Giants manager John McGraw kept only two framed photos in his office at the Polo Grounds: One of Christy Mathewson and the other of Youngs.

“He was the greatest outfielder I ever saw on a ball field,” McGraw said of Youngs. “The game was never over with Youngs until the last man was out. He could do everything a ball player should do and do it better than most players. As an outfielder he had no superiors, and he was the easiest man to handle I ever knew. In all his years with the Giants, he never caused one minute’s trouble for myself or the club.

“On top of all this, a gamer ballplayer than Youngs never played ball.”

Youngs was elected to the Hall of Fame in 1972. 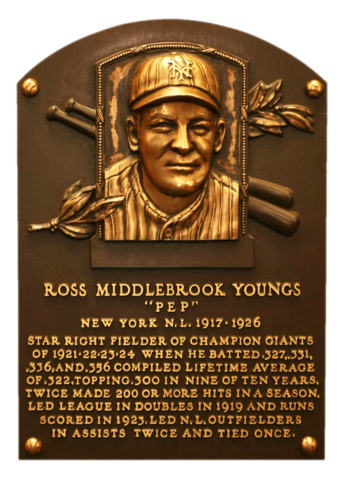 that a photo of Ross Youngs was one of only two kept above the office desk of legendary Giants skipper John McGraw? The other was of Hall of Fame pitcher Christy Mathewson.

"The game was never over with him until the last man was out. He could do everything a baseball player should do and do it better than most players. He was the easiest man to handle I ever knew. "
John McGraw