During 11 seasons in the big leagues, Charles "Old Hoss" Radbourn won an incredible 310 games. No pitcher in baseball history was as successful over a similar span.

Pitching mainly during the 1880s when hurlers worked virtually every day, Radbourn's statistics are almost unfathomable by today’s standards. In his rookie season with the National League's Providence Grays in 1881, Radbourn went 25-11 with a 2.43 ERA in 325.1 innings, leading the National League with a .694 winning percentage. He made 36 starts, completing 34 of them, and he would not pitch as few innings again in a season until 1888.

That merely set the stage for 1884, when he won 60 games while starting – and completing – 73 games. He pitched 678.2 innings, posted a 1.38 ERA and struck out 441 batters. That season, Radbourn at first took a back seat to the Grays' other starting pitcher, Charlie Sweeney, and was suspended without pay in mid-July for a fight with Sweeney. But when Sweeney quit the team on July 22, Radbourn came to the team with an offer to pitch every game the rest of the season in exchange for a raise.

Radbourn pitched Providence to an 84-28 record, first place in the NL and a three-game sweep of the 1884 championship series between Providence and the New York Metropolitans of the American Association. He started and won three games in that championship series, allowing no earned runs in 22 innings of work.

Radbourn never again reached his 1884 numbers, but won 28 games in 445.2 innings in 1885 before playing four seasons for the NL's Boston Beaneaters, reaching the 20-win mark three times. He won 27 games for the Boston Reds of the Players League before returning to the NL's Cincinnati Reds in the National League for his final big league campaign in 1891. He finished with a record of 310-194 and a 2.68 ERA. 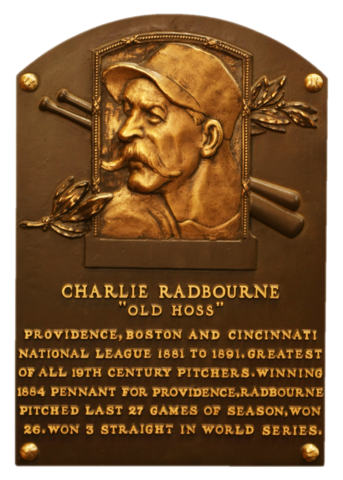 "He had wonderful grit and perfect command. Radbourn could throw the ball just where he wanted to, and that was just where the batsman did not want it, for no pitcher ever had the weaknesses of the batsmen who faced him down to a finer point that ‘Old Rad. "
Frank Bancroft