Earl Averill burst onto the big league season with a rookie season many would consider their best. However, Averill was just getting started, and by the time he was finished, the Washington State native dubbed the Earl of Snohomish had crafted a Hall of Fame career.

Born May 21, 1902, in Snohomish, Washington, Averill broke into the majors in 1929 at the relatively late age of 26. He made up for lost time during his rookie year, starting the season as the center fielder and number three batter for the Cleveland Indians.

“I thank the good Lord he wasn’t twins,” said Hall of Fame pitcher Lefty Gomez, whose Yankees battled the Indians in the American League throughout the 1930s. “One more like him probably would have kept me out of the Hall of Fame.”

Averill was traded to the Tigers on June 14, 1939, and the next year as a bench player he helped Detroit win the American League pennant. He retired after spending part of the 1941 season with the Boston Braves. that Earl Averill was the only American League outfielder to be named to each of the first six All-Star Games (1933-38)?

"I thank the good Lord he wasn’t twins. One more like him probably would have kept me out of the Hall of Fame. "
Lefty Gomez

The 1975 Induction Ceremony was held on Aug. 18, the latest date ever for the annual ceremony. 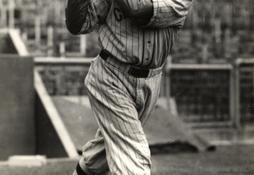