"He appeared almost casual on the mound, never creating the impression that he was bearing down with any great amount of sweat or strain. Games when the chips were down brought out the best in him." – Tom Meany

Waite Hoyt first signed a professional contract with the New York Giants as a 15-year-old at Erasmus High School in Brooklyn. But Hoyt played just one game for the Giants before embarking on a 21-year career with seven teams. Hoyt made his name with the Yankees, helping them to win three World Series titles in the 1920s.

The Yankees acquired Hoyt from the Red Sox before the 1921 season, when he was 21. He immediately validated the move by winning 19 games in each of his first two seasons in the Bronx. In the 1921 World Series against the Giants, Hoyt didn't allow an earned run in 27 innings, but still only went 2-1.

Hoyt continued to be a key contributor for the Yankees throughout the decade, peaking with the Yankees' World Series championship teams in 1923, 1927 and 1928. His 22-7 mark was the best winning percentage in baseball in 1927, and he earned MVP votes in 1928 after going 23-7. Hoyt was the ace of the 1927 Yankees, often considered the best team in baseball history.

During retirement, Hoyt became a popular broadcaster for the Cincinnati Reds, where he did play-by-play for 24 years. Perhaps his most famous moment as a broadcaster came when he spoke impromptu about Babe Ruth for two hours on air after a game when Ruth's death was announced. 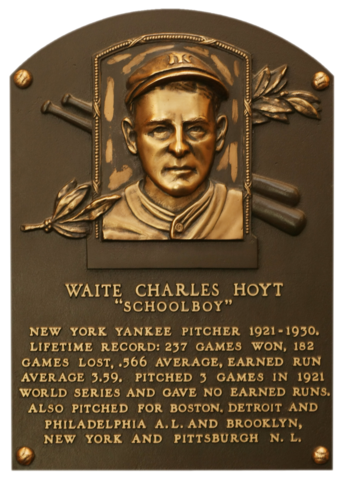 That Waite Hoyt was nicknamed The Merry Mortician because he worked as an undertaker during the offseason?

"He appeared almost casual on the mound, never creating the impression that he was bearing down with any great amount of sweat or strain. Games when the chips were down brought out the best in him. "
sportswriter Tom Meany 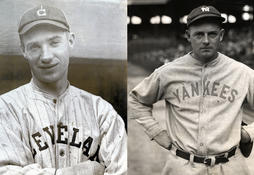 On Feb. 2, 1969, Stan Coveleski and Waite Hoyt were elected to the Hall of Fame by a unanimous vote of the 12-person Veterans Committee.
Explore more Inductees