When Miller Huggins took over as the New York Yankees’ manager in 1918, he assumed a struggling ball club who had hired seven different managers in the previous 10 years.

By the time Huggins passed away in 1929, the Yankees were well on their way toward becoming the most dominant baseball franchise of the 20th century.

Possessing a shrewd baseball mind and displaying a commitment to the fundamentals of baseball, Huggins led the Yankees to their first six American League pennants and three World Series championships during the 1920s. Furthermore, Huggins was able to motivate and restrain some of the game’s biggest personalities – none bigger than George Herman Ruth.

“He was the only man who knew how to keep me in line," said the Babe.

Huggins began as a diminutive second baseman who fought hard to gain the respect of his larger peers. Standing at 5-foot-6 and weighing just 140 pounds, Huggins studied law at the University of Cincinnati and used creativity and a stern batter’s eye to get on base. Nicknamed “Mighty Mite,” Huggins led the National League in walks twice during his first five seasons with the Reds, and then posted an on-base percentage of .402 during his time with the St. Louis Cardinals from 1910-16. On June 1, 1910, Huggins set a major league record with six plate appearances and no official at-bats by collecting four walks and two sacrifice flies.

Huggins served as player-manager for the Redbirds from 1913-17 before garnering the Yankees’ attention. AL president Ban Johnson recommended Huggins to Yankees co-owner Jacob Ruppert, however Ruppert’s co-owner Tillinghast Huston was opposed to the idea. Ruppert forged ahead, hiring Huggins in October 1917. Huston, meanwhile, would eventually sell his share of the team.

Huggins made plenty of changes during his first years in New York, however the Yankees’ fortunes remained stagnant. The team posted two consecutive third-place finishes in 1919 and 1920, and the press opined that “in the past Huggins has not shone as a leader of men.”

But in 1921, thanks in large part to the heroics of Ruth’s unprecedented 59 home runs, the Yankees silenced Huggins’ critics and won 98 games to capture the franchise’s first pennant. Ruth, however, suffered an injury in the World Series and the Yankees fell to the Giants.

The Yankees would win the next two pennants, giving Huggins three straight AL flags, and their first World Series championship in 1923. By the mid-1920s, Huggins’ reputation for finding talent had grown to the point where opposing teams were hesitant to trade with the Yankees. But there was one last hurdle that Huggins needed to clear: Gaining authority over the rambunctious Ruth.

Tensions between Huggins and Ruth came to a head in 1925 when the manager fined and suspended Ruth after a late night on the town. An indignant Ruth claimed he would never play for Huggins again, but Huggins stood his ground and refused to waver. Ruth relented a few days later.

“Ruth has changed his mind,” Ruppert announced in a press conference. “He’ll play for Mr. Huggins. The fine sticks and the suspension sticks for as long as Huggins wants.”

From that point on Ruth did not question his manager publicly again.

“There seemed to me to be an impression here and there that anybody could manage so great a team,” said Hall of Fame manager Connie Mack of the Yankees. “That’s wrong. It took Huggins to make those fellows fight and hustle.”

With the allegiance of his superstar and the subsequent addition of Hall of Famers Lou Gehrig, Tony Lazzeri, Earle Combs and Waite Hoyt, Huggins’ club matured into one of the most famous dynasties in baseball. The Bronx Bombers won another three consecutive pennants and two World Series titles from 1926-28, including the vaunted “Murderers’ Row” 1927 team that is rated by many as one of the best in history.

“There never has been a better judge of raw baseball talent than Huggins,” columnist Arthur Robinson would later write. “And every manager of the Yankees since him – all of them – have benefited from the foundation of the dynasty he built.”

Huggins' life came to a tragic end on Sept. 25, 1929. After receiving transfusions to treat a skin infection and a bout of influenza, the 51-year-old Huggins developed a blood infection that proved fatal. The Mighty Mite’s funeral was held in Yankee Stadium, drawing thousands of tearful fans. The American League canceled its games while the Yankees’ star players wept openly for their fallen manager.

“He was more like a father to me than anything else,” remembered Gehrig. “I call him the squarest shooter I ever knew in baseball.”

In 1932, a plaque dedicated to Huggins was placed in Yankee Stadium, beginning the tradition that is now known as Monument Park.

Huggins was elected to the Hall of Fame in 1964. 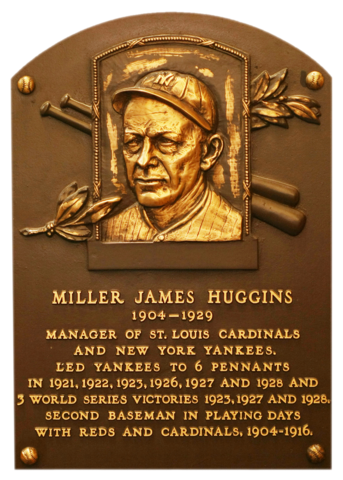 That prior to his managerial career, Miller Huggins received a law degree from the University of Cincinnati, and later passed the Ohio bar exams?

"Huggins was almost like a schoolmaster in the dugout. There was no goofing off. You watched the game, and you kept track not only of the score and the number of outs, but of the count on the batter. At any moment, Hug might ask you what the situation was. "
Waite Hoyt