Long before managers had scouts, sabermetrics or video at their disposal, Frank Selee was one of the first master talent evaluators in baseball history.

Selee himself never played an inning of major league baseball. He was working at a watch factory in Waltham, Mass., when he learned to play the game with an amateur team from nearby Melrose. In 1884, Selee quit his job and raised $1,000 to form a minor league team. His reputation for having a sharp baseball mind soon spread to the major leagues, and in 1890 Selee was named manager of the National League’s Boston Beaneaters.

In just his second season at the helm, Selee and his Beaneaters won 87 games and captured their first of three consecutive National League pennants. In 1892, Boston became the first NL team to win 100 games. Two years later, the Beaneaters set a league record for runs scored and became the only National League club from 1885-1921 to hit more than 100 home runs.

“Frank Selee is yet a young man, but he has established for himself a reputation as one of the foremost managers in the profession,” wrote the New York Clipper. “He has a quiet yet decisive way that probably enables him with better results than is attained by managers who make a great deal of noise and unnecessary bluster.”

Contrary to the rough tactics of rival clubs like the Baltimore Orioles, Selee encouraged his players to play a more civilized style. His teams surpassed brawnier opponents by hitting behind runners, employing the bunt and utilizing the double steal.

“The fact that the Bostons have always been noted for their gentlemanly deportment is due, in a great measure, to the example set by Selee,” reads a banquet program from the era, “who will not countenance anything that savors of rowdyism or “dirty” ball. The standing of the club during his incumbency is a tribute to his skill as a manager and his credit as a man.”

Though it was said that Selee could “tell a ballplayer in his street clothes,” it was his ability to see where that talent could be utilized on the diamond that made him a top-rate skipper. In Boston, Selee converted minor league outfielder Jimmy Collins into a Hall of Fame third baseman. Then, he took a struggling left-handed catcher named Fred Tenney and molded him into an elite first baseman who perfected the 3-6-3 double play. Historian David Nemec described Selee as having “a flair for bending players acquired from here, there and everywhere. [He was] a master at putting together a team better than the sum of its parts.”

In 1902, Selee was released by Boston and invited to the Windy City to manage the Chicago Cubs. In short time, Selee laid the foundation for the Cubs, who had experienced a down stretch in the National League, to become a powerhouse. In the winter of 1903, Selee traded two players to the Cardinals for rookie pitcher and future Hall of Famer Mordecai “Three Finger” Brown. Meanwhile, Selee was also busy assembling one of the greatest infields in baseball history.

He acquired minor league third baseman Joe Tinker and moved him to shortstop, picked up 20-year old second baseman Johnny Evers from the New York State League, and moved catcher Frank Chance to first base. Soon these three players would be forever linked as the famous double play combination of “Tinker to Evers to Chance.”

Those players would go on to win four out of five pennants and two World Series championships from 1906-10. But the Cubs’ grand architect would be forced to watch their success from a hospital bed. Citing poor health, Selee retired from baseball during the 1905 season and turned the team over to Chance. Selee died on July 5, 1909, from tuberculosis at the age of 49.

Selee retired with a winning percentage of .598 over 16 seasons as a manager. He was elected to the Hall of Fame in 1999. 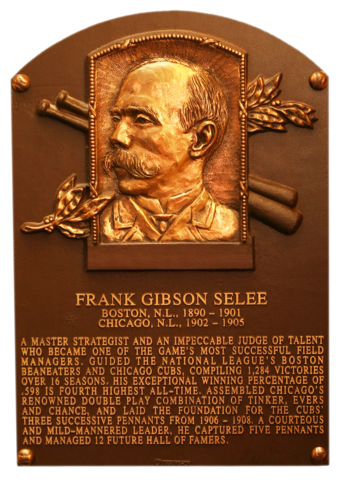 that Frank Selee's 1892 Boston Beaneaters were the first team to win more than 100 games in a big league season?

"He had a flair for blending players acquired from here, there and everywhere. He was a master at putting together a team better than the sum of its parts. "
David Nemec (19th Century baseball historian)