"There has been only one manager – and his name is McGraw.” – Connie Mack

Beginning as a player, the fiery John McGraw pioneered tactics still in use today. The oldest of eight children born to Irish immigrant parents, McGraw learned how to fight for everything that was given to him. Standing just 5-foot-7 and weighing 155 pounds, McGraw broke into the National League with the Baltimore Orioles in 1891 and was one of the game’s early stars. He led the league in runs twice and sported a lifetime batting average of .334 while introducing the hit-and-run, the Baltimore chop, the squeeze and other tactics to scratch out runs during the Dead Ball Era.

McGraw played third base in Baltimore and St. Louis for 11 seasons – managing with the Orioles in 1899 and 1901-02 – before taking over as player-manager of the New York Giants during the 1902 season at the age of 29. For the next 30 years, McGraw, nicknamed “Little Napoleon,” tirelessly developed players in the way he felt the game should be played. He also translated his aggressive tactics as a ball player to his managerial style, frequently calling for pinch-runners and encouraging his players to steal as many bases as possible.

With McGraw in the dugout, the Giants morphed into a perennial powerhouse. New York captured the NL pennant in 1904, but McGraw refused to enter his squad into the World Series due to his hatred of Ban Johnson and the fledgling American League. The Giants won the pennant again in 1905, this time defeating Connie Mack’s AL champion Athletics to capture their first World Series title.

McGraw collected a total of 10 National League pennants and three Fall Classics wins mixing brilliant strategy with tempestuous emotion. He was the first manager to win four consecutive pennants in either league (1921-24), and set a then-major league record with 131 ejections.

McGraw finally retired in 1932 with 2,763 victories – still second only to Mack on the all-time list. The Giants posted just two losing records in his 26 full seasons at the helm. 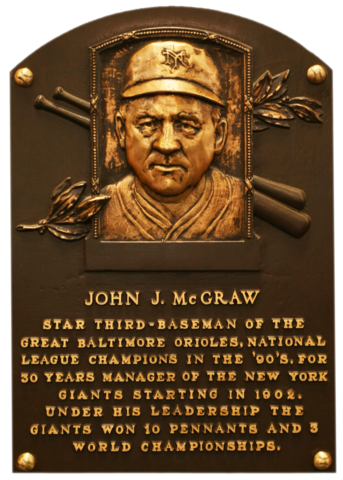 that John McGraw came out of retirement to manage the National League in the very first major league All-Star Game, July 6, 1933?

"There has been only one manager – and his name is McGraw. "
Connie Mack 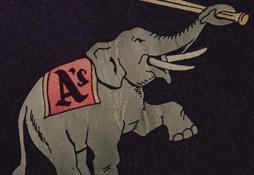 Pachyderm images made famous by the Athletics adorn the collection at Hall of Fame. 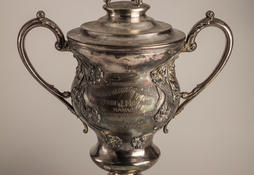 Vaudeville star Eddie Leonard presented this ornate cup to Hall of Fame manager John McGraw, as a token of his appreciation and respect.
Explore more Inductees