"Players have been bought, sold and exchanged as though they were sheep instead of American citizens," John Montgomery Ward said.

Throughout his career, Ward fought to broaden players' rights in the game while fashioning an outstanding record as a pitcher and infielder.

Ward was a bright child who attended Penn State University at the age of 13. But tragedy struck the following year, when Ward's mother died – his father had passed away in 1871 – and he was forced to quit school and support himself. He tried to make it as a traveling salesman, but quit after two weeks and discovered baseball.

He played on semipro teams for a few years and did odd jobs on the side before his big break came with the National League's Providence Grays in 1878. That year, as an 18-year-old pitcher, he led the NL with a 1.51 ERA on his way to a 22-13 season over 37 starts and 334 innings.

He won a league-leading 47 games in 1878, and the following year became the second pitcher in big league history to throw a perfect game.

Ward was a pitcher and outfielder for his first seven seasons before a nagging arm injury forced a move over to shortstop and second base for the next 10 years. He hit .275 over his career, totaling 2,107 hits and 1,410 runs scored. As a pitcher, he finished with a record of 164-103 and a 2.10 ERA.

Ward also acted as a player-manager, managing parts of seven seasons. He attended law school in the offseason and earned a law degree from Columbia in 1885 and a political science degree in 1886.

He put the degrees to good use by fighting for players' rights and set up the first-ever players union in 1885, successfully challenging the player reserve clause, which bound players to one team.

Ward retired from baseball at age 34 to continue with his legal career. He represented baseball players against the National League and later acted as president of the Boston Braves franchise. 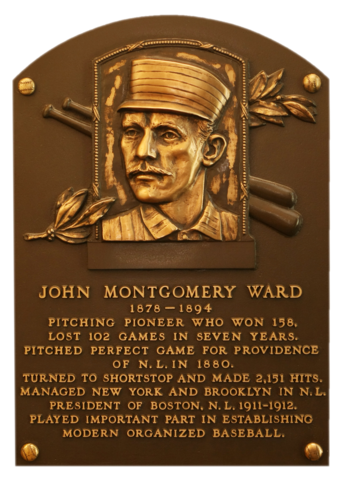 "No player before or after his day on the diamond ever did more to bring the sport to its present high standing and popularity. He was considered the model ballplayer of the century. "
Sam Crane, NY Journal