Few men in the history of baseball have seen great success as a player and as a manager. Frank Chance was one of them.

But Chance’s most enduring legacy – despite his success on the field and in the dugout – has been as the subject of the most celebrated baseball poem ever written.

“Baseball’s Sad Lexicon” by Franklin P. Adams uses the refrain “Tinker to Evers to Chance” as a description of the Chicago Cubs' double-play combination in the early 1900s. After mostly catching and playing outfield for his first four years in the big leagues, Chance played the majority of his games at first base beginning in 1902, leading to his place in the poem.

“He was a great player – I think one of the best first basemen ever in the game – but in addition he was a great leader because he asked no man to take any chance that he would not take himself and because he had the power to instill enthusiasm even in a losing cause,” said fellow Hall of Fame manager John McGraw.

“Here’s the most promising player I ever saw,” said Bill Lange, former Chicago Colts outfielder who discovered Chance. “Some day he’ll be a wonder.”

“Chance is one great artist and to my mind ranks with Lajoie and Wagner,” said former major leaguer Danny Shay. “He is everything they are – a great hitter, splendid fielder, fast base-runner and has a head full of brains.”

Chance played for the Yankees in 1913-14, but appeared in considerably less games from 1912 on after suffering chronic headaches caused by several beanings. He finished his career with a .296 batting average, 1,273 hits, 401 stolen bases and 797 runs.

“Frank Chance was a wonderful fellow and a great manager,” Wilbert Robinson said. “He played the game hard all the way.”

Chance was elected to the Baseball Hall of Fame in 1946. 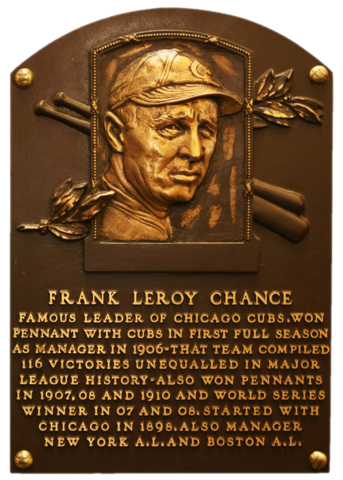 that Frank Chance became the first player ejected from a World Series game following his argument with future Hall of Fame umpire Tom Connolly in Game 3 of the 1910 Fall Classic?

"But for Chance was reserved the major honors, for in the eighth, by one of the most astounding plays ever made, he stopped the Pirates. Leach hit a fierce line drive straight over first. It looked like a sure double until chance, with a running jump, shoved out one hand, turned backwards, and clung to the ball. Against that kind of defensive work, Pittsburgh had no chance. "
Hugh Fullerton, New York American