A catcher’s value can be derived from much more than just his offense, and there’s no greater example of this than Ray Schalk. The undersized backstop was a workhorse for the White Sox clubs of the 1910s and 1920s, and he’s regarded as the finest defensive catcher of the Dead Ball Era.

Schalk made his big league debut one day before his 20th birthday in August 1912, then took over as the White Sox’s everyday catcher in 1913. Schalk’s most notable offensive feat was his 30 stolen bases in 1916, establishing a record for catchers that stood until John Wathan broke it in 1982.

Where Schalk really made his name was on defense. Combining his sharp mind for the game with a blue-collar approach, Schalk proved adept at handling a wide variety of pitching styles. A true workhorse, Schalk led the American League in games caught seven times, including his 1920 season when he caught 151 of Chicago’s 154 games. His defensive prowess stands out even more since he was excelling during many years where the spitball was legal.

Schalk was also credited with catching four no-hitters in his career, though one of those was taken away when the standards for no-hitters were adjusted in 1991.

“If I was a good catcher, it was because I learned from the masters,” Schalk said. “I caught pitchers of long experience and they hammered the game into me. I had to learn or lose my job. They made me a star.”

Schalk pioneered aspects of the catcher’s position often taken for granted. An active part of the infield, he was believed to be among the first catchers to back up throws to first base on ground outs or third base on throws from the outfield. He also recorded putouts at every base over the course of his career, even second base, and he led AL catchers in fielding percentage five times and caught stealing percentage three times.

Schalk was a member of the 1919 Black Sox team which threw the World Series against the Reds. Schalk himself was clean, and hit .304 in the Series, though he suspected something was amiss when his pitchers kept crossing him up. But Schalk always refused to impugn his teammates publicly.

Schalk later spent two seasons as a player-manager for the White Sox in 1927-28, followed by a long career coaching in the minor leagues and with Purdue University. 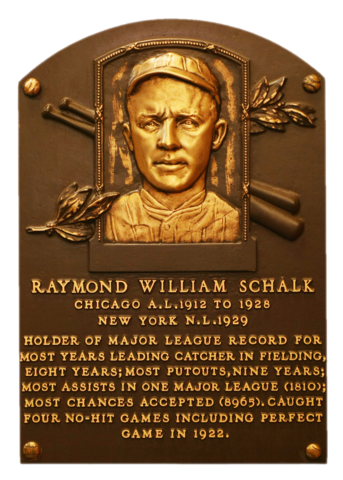 "He was a little man, five feet, nine inches tall, weighing less than 150 pounds. But there was nobody that size who made a bigger impact on a ball game. "
Eliot Asinof