But it was his powerful right arm that earned him the nickname "Bullet".

By not beginning his Negro League career until his mid 20s, Rogan – who also went by the first name "Joe" – got a late start. Nevertheless, he excelled during his 19 seasons with the Kansas City Monarchs after beginning his baseball career while serving in the Army, playing for a team in the all-black 25th Infantry.

Rogan went 120-52 in his pitching career, completing 136 of the 157 games that he started while using his repertoire of curveballs, spitballs, palm balls, forkballs and fastballs to strike out 918 batters.

Splitting his time between the mound and the outfield, Rogan compiled a career batting average of .338 to go with a .521 slugging percentage and a .934 OPS. He hit 50 home runs, stole 106 bases and scored 413 runs. Rogan also notched 419 RBI.

While Rogan’s pitching was often compared to that of Satchel Paige, his son Wilber pointed out that there was at least one difference: “I do know that Satchel needed a designated hitter when he was on the mound,” the younger Rogan said of his father. “When dad was on the mound, he was batting cleanup.” 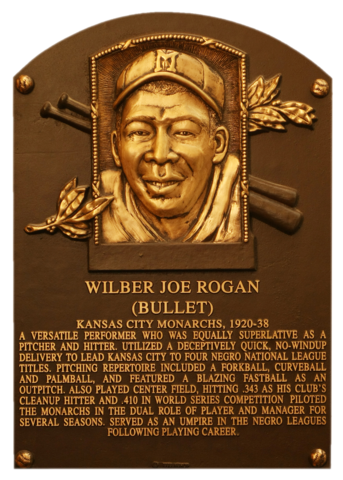