Known as “The Human Vacuum Cleaner,” Brooks Robinson is regarded as arguably the best defensive third baseman the game has ever seen.

Hall of Famer Frank Robinson recalled what it was like to watch his teammate go to work: “He was the best defensive player at any position. I used to stand in the outfield like a fan and watch him make play after play. I used to think, ‘Wow! I can’t believe this.’”

Robinson began his career with the Baltimore Orioles – the only team he ever played for – in 1955, and for 23 years dazzled fans on the field with his glove. Off the field, he was humble and gracious. Joe Falls of the Detroit News pondered: “How many interviews, how many questions – how many times you approached him and got only courtesy and decency in return. A true gentleman who never took himself seriously. I always had the idea he didn’t know he was Brooks Robinson.”

In total, the 18-time All-Star and winner 16 consecutive Gold Glove Awards led the Orioles to six postseasons, including two World Series Championships. In 1964, Robinson took home American League MVP honors, putting up the finest offensive season of his career, leading the league with 118 RBI. In 1966, he won the All-Star Game MVP Award despite the American League losing the game.

In 1970, he was named the World Series MVP, hitting .429 with two home runs and six RBI while stealing several hits away from Cincinnati Reds batters at third base.

Robinson retired after the 1977 season and the Orioles wasted no time in retiring his No. 5. He led all AL third basemen in fielding percentage 11 times and assists eight times. His 2,870 games at third base rank No. 1 on the all-time list.

He was so beloved in Baltimore that sports writer Gordon Beard wrote: “Brooks (Robinson) never asked anyone to name a candy bar after him. In Baltimore, people named their children after him.”

Robinson was elected to the Hall of Fame in 1983. 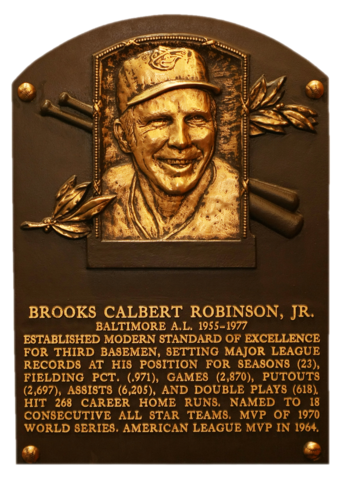 that Brooks Robinson's memorable performance in the 1970 World Series coincided with the first-ever Fall Classic to be played on artificial turf (Cincinnati's Riverfront Stadium)?

"He plays third base like he came down from a higher league. "
umpire Ed Hurley 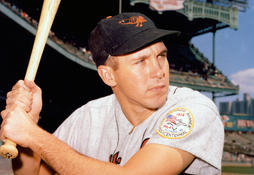 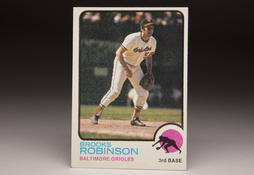 On July 31 1983, Walter Alston, George Kell, Juan Marichal and Brooks Robinson were inducted into the Hall of Fame.