Third base remains baseball’s enigmatic position, the one where fielding prowess stands on equal ground with hitting skill.

It is the rarest of combinations, and the position that has sent the fewest major leaguers to the Baseball Hall of Fame.

But third baseman George Kell parlayed his skills with the lumber and the leather into one of baseball’s most consistent careers of the middle part of the 20th century.

Kell broke into the big leagues with the Athletics at the end of the 1943 season, then took over as Philadelphia’s every day third baseman the next year at 21 years old. After two get-your-feet wet seasons where he struck out just 38 times out of 1,088 at-bats – and finished 22nd in the American League MVP vote in 1944 – Kell was traded to the Detroit Tigers on May 18, 1946 for Barney McCosky.

It was a trade A’s owner Connie Mack would long regret.

Kell was traded to the Red Sox during the 1952 season, then played with the White Sox and Orioles before finishing his career in 1957 with his 10th-and-final All-Star selection. He was selected to the Mid Summer Classic roster in 10 of his final 11 seasons.

Kell wrapped up his career with a .306 average – his ringing right-handed line drives producing a .300-or-better average in nine straight seasons. He struck out just 287 times.

“I have always said that George Kell has taken more from this great game of baseball than he can ever give back,” said Kell at his 1983 Hall of Fame induction. “And now I know, I am deeper in debt than ever before.” 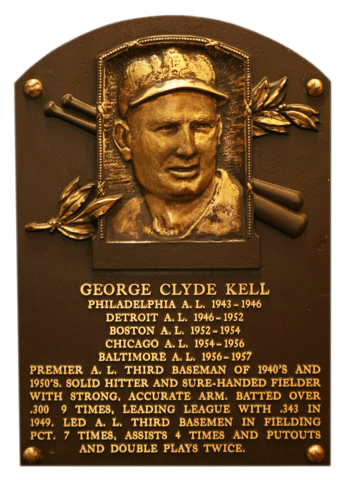 that George Kell's 13 strikeouts in 1949 is the lowest total for a Live Ball Era (post 1919) batting champion in big league history?

"George Kell was a professional in everything he did-on the field, in the broadcast booth and the way he treated everyone he met. He led by example. "
Sparky Anderson