Arguably one of the best players of the 19th century, Ed Delahanty was the first player in modern major league history to hit over .400 three times.

The eldest of five brothers to play in the big leagues, Big Ed was a five-tool player – he could hit for power and average, was a terrific fielder with a strong arm and was quick on the basepaths, leading the National League in stolen bases with 58 in 1898.

The Sporting Life, the prominent sports publication of the 19th century, commented: “Delahanty is an awfully even, well balanced player all around…You look at his batting and say well, that chap is valuable if he couldn't catch the measles, and then you look at his fielding and conclude that it wouldn't pay to let him go if he couldn't hit a bat bag.”

Not only could the big left fielder slug doubles and home runs, but he could hit the ball all over the field depending on the situation. If the outfielders played deep, he would drop one in front of them; at normal depth he would slug away and try to put one over their heads.

Reds hurler Philip “Red” Ehret said Delahanty was “The hardest man in the league for pitcher’s to puzzle.” Sam Crawford called him “The best right-handed hitter I ever saw.”

In his 16 years in the big leagues, Delahanty led the league in home runs twice, RBI three times, doubles five times, batting average twice and hits and triples once each. Twice, Big Ed went six-for-six in a game and he once went nine-for-nine in a doubleheader. Twenty-year veteran backstop Jack O'Connor recalled, “If Del had a weakness at the bat, I never could discover it.”

Delahanty was one of baseball’s first superstars. Conscious of his star power, Delahanty jumped teams several times in search of a bigger pay day; first in 1890 to the Player’s League and then again in 1902 to the American League. An agreement between the two leagues in 1903 prevented Delahanty from jumping to the National League’s New York Giants.

At age 35, Delahanty’s life came to a tragic end when he exited a train and fell off the International Railway Bridge that crossed over Niagara Falls on July 2, 1903.

Years after his death, the Sporting News wrote of Delahanty: “He was among the greatest batters the game ever produced. Great batters, like poets, are born, not made.”

Delahanty was elected to the Hall of Fame in 1945. 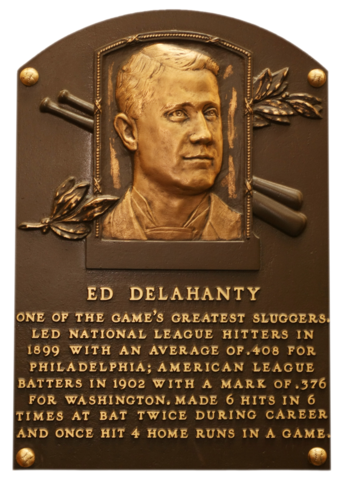 that Ed Delahanty topped the .400 batting average mark in three seasons, tied for the most in history with Ty Cobb and Rogers Hornsby among players who appeared in games in the 20th century or later?

"I think Ed was the best right-handed hitter I ever saw. "
Sam Crawford