Signed by the legendary Branch Rickey as a 17-year-old shortstop in 1954, Bill Mazeroski was moved over to the other side of the second base bag after only one season of pro ball. By his 20th birthday, he was the Pittsburgh Pirates’ regular second baseman.

Bill Mazeroski is widely regarded as one of the best fielders the game has ever seen, at any position. Not only could he make the routine plays, but he could make plays no one else could and could make them look routine. Teammate Vern Law said: “Maz would constantly come up with balls we thought were base hits. You’re running over to back up a base and here Maz has got the ball and he’s throwing that hitter out.”

Bill Virdon recalled what it was like playing behind him in center field. “The impressive thing about Maz was that he did everything at second base. I backed him up for six years and never got a ball,” Virdon said.

Although Mazeroski was never known for his work with the bat, he averaged 65 RBI per season in each of his first 11 full seasons – much better than average for a second baseman of his era. But it was his spectacular defense that led him to eight Gold Glove Awards and 10 All-Star Game appearances in 17 seasons. Mazeroski led all NL second basemen in assists nine times, double plays eight times (he's the MLB career leader in double plays turned by a second baseman), putouts five times and fielding percentage three times.

For someone known for his glove, it was with his bat that Mazeroski left perhaps his most indelible mark on the game. It was the bottom of the ninth inning of Game 7 of the 1960 World Series – a series in which the Pirates had been outscored in the first six games 46-17. Mazeroski led off the ninth inning of a 9-9 tie and took a 1-0 pitch from Ralph Terry over the left field wall at Pittsburgh's Forbes Field. That home run won the Pirates their first World Series in 35 years and was the first walk-off series-ending home run in World Series history.

Mazeroski was elected to the Hall of Fame in 2001. 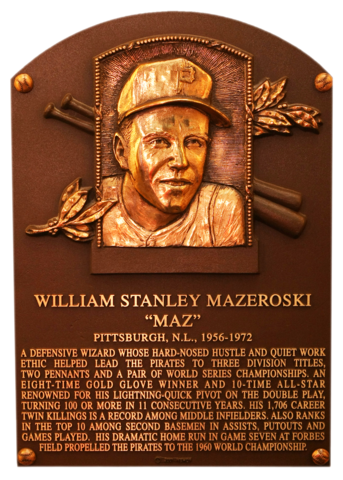 that in a role originally intended for Roberto Clemente, Bill Mazeroski had a cameo appearance in the 1968 film The Odd Couple, in which he hits into a game-ending triple play?

"It's an honor just to be put in Maz's class. I don't mean to sound corny. For years, I've watched Maz make the tough play look easy. The way he makes the double play is a thing of beauty. "
Glenn Beckert