Twenty-four year-olds are not often found in leadership positions. But at that age, Fred Clarke fit right in as a player and skipper of a major league club.

As one of the first “boy-managers”, Clarke starred in left field and led his teams to win from the field and the dugout.

“I tell you managing a team from the bench is far different from directing from the field,” he said. “I would much rather be a playing manager not only because I like to play ball, but because when I am in there playing my mind is on the game, and not filled with the perplexities and troubles of the manager.”

Born on Oct. 3, 1872 in Winterset, Iowa, Clark spent a lot of time on a ball diamond as a youngster.

“I thought I was pretty good if I caught half the fly balls that came to me,” Clarke said.

He signed with the Louisville Colonels in 1894 and hit .347 in his first full season in 1895. Winning over fans and fellow players alike, Clarke was named manager in 1897 and saw limited success leading the team. But when the Colonels ceased play in 1900, Pittsburgh Pirates owner Barney Dreyfuss brought several of the best Louisville players to Pittsburgh – including Clarke and Honus Wagner.

Dreyfuss immediately named Clarke captain/manager. The team went from a seventh place finish in 1899 to second place in Clarke’s first season in in Pittsburgh in 1900. Clarke led the Pirates to pennants from 1901-1903 and 1909 and a World Series championship in 1909.

“You’ve got to love baseball and want to play it above all else,” Clarke said. “You have to take every opportunity to practice and play. And not be discouraged. The most important thing is desire.”

“As a player, Clarke's name will go down in history as one of the greatest in the game. In his prime, he was a remarkable batsman,” said sportswriter William Slocum. 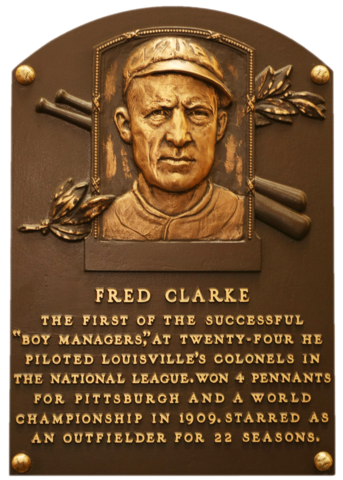 that the 1902 National League champion Pittsburgh Pirates, managed by Fred Clarke, lost just 36 games all season, a modern era record that has never been bested?

"He was one of the fastest base runners of all time. He used his elbows in running as much as his legs and tried to jar the ball loose whenever the infielders held it. "
Baseball Hall of Fame historian Lee Allen