“They called him ‘High Pockets,’ but George Kelly was more than just a colorful appellation.” – The Associated Press, 1973

A gangly 6-foot-4 infielder, George “High Pockets” Kelly reached the major leagues at 19 with the New York Giants in 1915. He established himself as a regular in the lineup by 1920, when he tied Rogers Hornsby for the National League lead with 94 RBI.

Kelly returned to the World Series against the Yankees again in 1923 and then against the Washington Senators in 1924, but the Giants fell in six games to the Yankees and in seven to the Senators. Kelly’s 1924 season was arguably his most productive one, as he drove in 136 runs to capture his second RBI crown and finish sixth in MVP voting. With a three-homer game against the Reds in June, Kelly became the first player to hit three home runs in a game multiple times.

Kelly spent the majority of his career at first base, but Giants manager John McGraw installed him as the club’s primary second baseman for the 1925 season to make room for another future Hall of Famer at first base, Bill Terry. Well-regarded for his defense at first base, Kelly handled the transition capably. At the plate, he led the Giants in hits and finished third in MVP voting, but the Giants finished second to the Pirates in the NL.

He moved back to first base in 1926 and hit over .300 for the sixth straight year, but the Giants finished under .500 for the first team since Kelly made his debut in 1915.

Traded to the Reds prior to the 1927 season for Edd Roush, Kelly spent three and a half seasons with Cincinnati. In 1929 he led the Reds in doubles (45) and RBIs (103), his fifth and final season in which he drove in at least 100 runs. 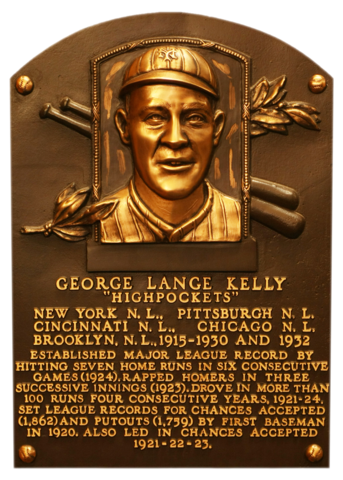 that George Kelly became the first player to hit home runs in six consecutive games when he did so in July of 1924?