When 19th century baseball star Roger Connor passed away in 1931 at the age of 74, the first line of his obituary called him “The Babe Ruth of the ‘80s.” But Connor was much more than just a slugger.

Connor spent 18 seasons in the big leagues, breaking in with the Troy Trojans in 1880 before finding a longtime home with the New York Giants. The broad shouldered first baseman with the distinctive handlebar moustache would eventually become the National Pastime’s first power hitter as well as one of the most popular players of his time. When he retired in 1897, his 138 career home runs were more than anybody had ever hit until Ruth surpassed him in 1921.

“He is as fine a specimen of physical development as any in the profession, being a few inches over six feet in height, weighing over two hundred pounds, without an ounce of superfluous flesh, and being admirably proportioned,” read a profile in The New York Clipper. “Not withstanding his great size, he is endowed with more than the average amount of activity, and evidently possesses extraordinary powers of endurance.

“Connor’s honorable and straightforward conduct and affable and courteous demeanor towards all with whom he is brought into contact have won him deserved popularity both on and off the ball field.”

An offensive marvel, the lefty-swinging Connor would hit more than 10 home runs in a season seven times, a 19th century record, and on 11 occasions topped a .300 batting average.

One of Connor’s more memorable feats occurred on Sept. 11, 1886. Playing at the old Polo Grounds in New York City, at 110th Street and Fifth Avenue, he hit a ball that landed on 112th Street on the other side of the right field wall. So impressed were members of the New York Stock Exchange that they passed around a black top hat and took up a collection that eventually led to a $500 gold watch being presented to Connor a few games later.

According to The New York Times, “He met it squarely and it soared up with the speed of a carrier pigeon. All eyes were turned on the tiny sphere as it soared over the head of Charlie Buffinton in right field.”

“Dear Old Roger,” as the fans called him, was later quoted as saying, “I used to nail the horsehide over the fence into the tall grass and that would tickle some of the old New York stockbrokers.”

Blessed with not only power but with speed, Connor was known as an intelligent base runner who would end his career with more than 200 stolen bases and triples.

Sportswriter Sam Crane once penned: “With his weight catapulting him, with speed and force, he slid feet first and, as he landed, could bob up, like a jack-in-the-box.” 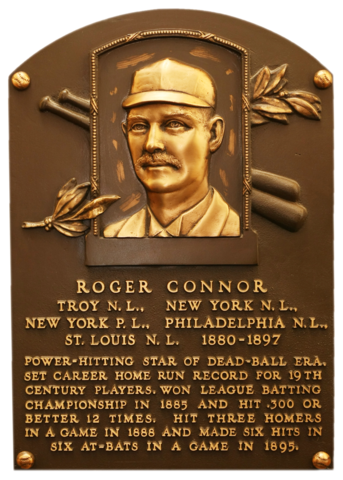 that on Sept. 10, 1881, with two outs in the bottom of the ninth and his team trailing by three runs, Roger Connor won the game by hitting the first grand slam in big league history?

"Roger was both active and nimble and did fully as well, if not better, in the fielding line than his contemporaries. He had a tremendous reach, a good pair of hands and was exceedingly good on pickups, digging the ball out of the dirt. "
Sam Crane