Bill Terry's big league career almost ended before it began. Once he got his chance though, Terry became one of the National League's best first basemen of the 1920s and '30s – and at the same time proved to be a highly successful manager.

Terry originally tried to make it as a pitcher in the mid-1910s. He had some fine seasons in the minor leagues, but was never signed by a big league club. He actually left professional ball for a time, taking a job with Standard Oil in Memphis. He continued playing for his plant's team though, and in 1922 he was brought to the attention of New York Giants manager John McGraw.

Much to McGraw's surprise, Terry wouldn't join the Giants unless McGraw met his financial demands, and the two would always have a frosty relationship. McGraw eventually relented, and Terry cemented himself as the Giants' everyday first baseman in 1925 when he hit .319 – the third-best average on the team among regulars – at age 26 in his first season as a starter.

Terry never batted under .322 in the nine seasons in which he totaled more than 475 at-bats. He finished second in the National League in batting three times and captured the batting title once when he hit .401 in 1930. He remains the last National League player to hit .400.

The left-handed hitting Terry concentrated on hitting balls up the middle and to left-center. While he did have three 20-home run seasons and hit 154 for his career, some observers felt he could've hit more if he'd taken advantage of the short porches down the lines at the Polo Grounds. But Terry's ability to hit for average produced a .341 mark for his career. Only eight batters who began their careers in the 20th century or after have topped that mark.

Terry succeeded McGraw as the Giants' manager in the middle of the 1932 season. A year later, the 34-year-old Terry managed the Giants to the 1933 World Series title while continuing to be their leading hitter with a .322 average. Terry intended to end his playing career after the 1935 season, but he reversed course in the middle of 1936 and played through severe knee problems, continuing to hit while leading the Giants to another NL pennant that season.

Terry did retire as a player after 1936, but he continued managing the Giants for another five seasons, including another NL pennant in 1937. He totaled 823 wins, three NL pennants and one World Series title in his 10 seasons as Giants manager. 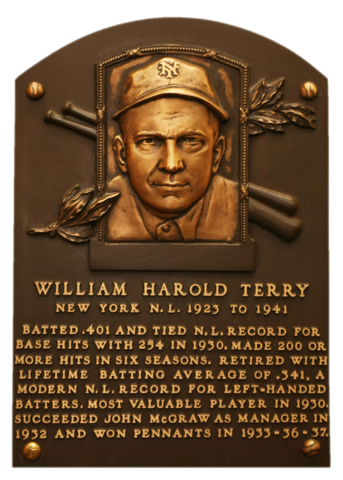 that Bill Terry 's career batting average of .3412 is ninth all-time among players who started their career in the 20th century or later?

"He has often been misunderstood, and what passed for coldness has merely been an impatience with stupid questions. "
Lee Allen