In his short but brilliant career, Amos Rusie helped revolutionize the game of baseball with his velocity. Perhaps the fastest pitcher of the 1890s, the right-handed Rusie won five National League strikeout titles in six seasons with the New York Giants from 1890-95, both before and after baseball moved the pitching mound in 1893 from 50 feet to its present 60 feet, 6 inches.

Rusie struck out 5.4 batters per nine innings in four seasons prior to the switch and 4.0 per nine in his first five years afterward. But like many hard-throwers, Rusie did not always have the firmest grasp of the strike zone. He led the NL in walks for five straight seasons from 1890 to ’94, and his 289 free passes in 1890 remain the single-season record.

In Rusie’s finest season, 1894, he went 36-13 with a 2.78 ERA – in a year in which the NL average was 5.33. He led the league in wins, ERA, starts (50) and shutouts (three) as well as both strikeouts (195) and walks (200). Behind the pitching of Rusie, who allowed only one earned run in 18 innings, the ’94 Giants defeated the Baltimore Orioles four games to none in the first Temple Cup championship series, which pitted the NL’s top team versus the runner-up.

During his time with the Giants, 1890 through '98, Rusie led all big league pitchers with 1,835 strikeouts and a 2.89 ERA, while ranking second in innings pitched (behind Kid Nichols) and third in wins (behind Nichols and Cy Young). That was in spite of sitting out all of the 1896 season in a contract dispute with Giants owner Andrew Freedman. The two sides settled in time for Rusie to return to action in 1897, but the effects of arm trouble and personal problems rendered him unable to pitch during the 1899 and 1900 seasons.

New York traded Rusie to the Reds for a 20-year-old Christy Mathewson in December 1900, exchanging one of baseball’s most dominant pitchers of the 1890s for one of its best of the early 20th century. Rusie appeared in three games with the Reds in 1901 before retiring. 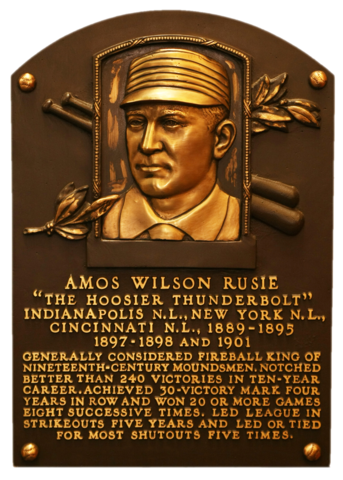 that in 1900, Amos Rusie was traded from the Giants to the Reds for future Hall of Fame pitcher Christy Mathewson?

"The Giants without Rusie would be like Hamlet without the Melancholy Dane. "
O.P. Caylor, NY Herald