By today’s standards, his nickname seems less than appropriate.

But in his time, John Franklin “Home Run” Baker – author of 96 big league round trippers – was the symbol of power on the diamond.

And more than 100 years after earning his nickname, Baker remains a part of baseball lore.

Born March 13, 1886, in Trappe, Md., Baker grew up on a farm and later used his exceptional strength playing for semi-pro teams around Maryland’s Eastern Shore. Baker hooked on with Reading, Pa., of the Tri-State League in 1908 – and that September he debuted with Connie Mack’s Philadelphia Athletics.

The next season, the 23-year-old Baker took over as the A’s third baseman, leading the American League in triples with 19 while batting .305 with 85 RBI – but hitting only four home runs.

In 1910, Baker’s homer total dropped to two – but he more than made up for it by hitting .409 in the World Series against the Cubs, leading the A’s past the Cubs in five games with six runs scored and four RBI.

Then in 1911, Baker – who used an unusually heavy bat weighing 46 ounces – hit an AL-best 11 home runs and drove in 115 runs. In that year’s World Series, Baker crafted his legend with game-winning home runs in Game 2 off future Hall of Famer Rube Marquard and in Game 3 against future Hall of Famer Christy Mathewson – the final blast handing Mathewson his first World Series defeat.

Thereafter, the press referred to him as Home Run Baker.

Baker led the AL in home runs and RBI in both 1912 and 1913, helping the A’s win a third World Championship in four seasons in the latter season. But following Philadelphia’s defeat in the 1914 Fall Classic at the hands of the Boston Braves – and facing a national economic slowdown – A’s manager Connie Mack sold Baker to the Yankees.

Faced with the prospect of playing further away from his Maryland home, Baker refused to report and instead spent 1915 playing semi-pro baseball.

Baker agreed to report to the Yankees in 1916, and spent the next four seasons as New York’s third baseman, averaging eight home runs a year. He retired prior to the 1920 season following the death of his first wife, but returned to the Yankees in 1921 and 1922 before ending his big league career. 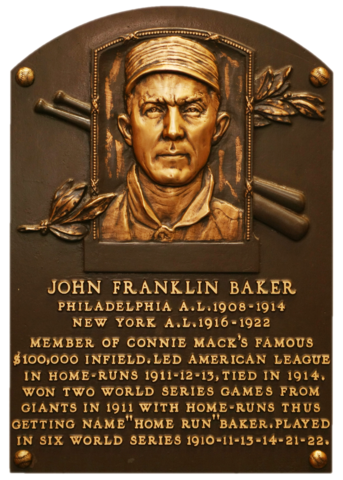 that over his 13-year Major League career, Frank Baker never played a single big league inning at any position other than third base?

"Baker used a bat antiquated even in his time. The handle was almost the size of the barrel. It was short, but almost like a piece of lead because it weight up to 46 ounces. There was no flex—it really was a wagon tongue. "
Jack McGrath, Louisville Slugger