Sam Rice didn’t enter the majors until he was 25 years old. He started in the big leagues as a pitcher and developed into a great hitter, with a .322 lifetime average, 2,987 total hits and six seasons with more than 200 hits.

Rice was a part of the only three Washington Senators teams that ever won pennants and he holds the franchise records for hits, doubles, triples and runs scored.

In 1920, Rice had 454 putouts, good for the American League record at the time. He all American League outfielders in putouts twice and in assists once, and was among the league leaders in each category numerous times. He also topped the circuit in 1920 with 63 stolen bases and was ranked among the Top 5 in that category for eight consecutive seasons.

Rice led the AL in hits in 1924, helping the Senators to their first pennant. They beat the New York Giants to become World Series champions. The following season, Washington once again won the pennant, but lost the Fall Classic in seven games. In that World Series against the Pirates, Rice had a .364 average, 12 hits, five runs and three RBI. He had career highs in 1925 in batting average (.350) and hits (227), while scoring 111 runs and totaling 87 RBI. His 182 singles stood as the AL record until 1980. 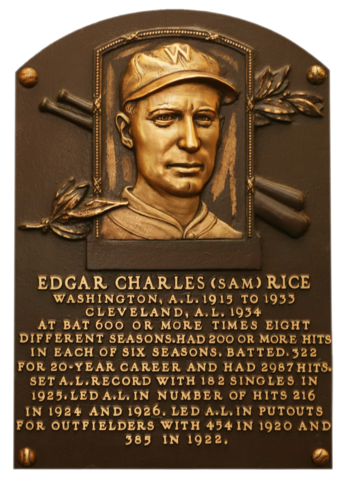 that Sam Rice finished his career with 2,987 hits, the closest any player has come to the 3,000-hit mark without reaching it? 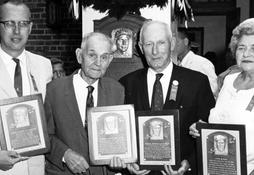 On Jan. 27, 1963, four former stars were elected into the Hall of Fame.
Explore more Inductees