In October 1923, Washington Senators owner Clark Griffith was looking to make a change, once again, with his team’s leadership.

Often derided as “First in war, first in peace, and last in the American League,” the Senators’ first quarter-century was marked with mediocrity. After a fourth-place finish in 1923, Griffith fired manager Donie Bush and turned to his young second baseman, Bucky Harris.

“You’re only a kid, as managers go,” Griffith told Harris. “But I’m gambling on you having the right stuff.”

In 1924, Griffith’s gamble paid off immediately. At age 27, Harris promptly led his team to its first pennant and World Series title that fall. It was an incredible feat for a man who was forever known afterward as “The Boy Wonder.”

Growing up in the small coal mining town of Pittston, Pa., Harris was first discovered by Senators scout Joe Engel in 1919. He debuted for the Senators at age 22 and soon established a reputation as a .300 hitter and a fierce competitor who had stood up to Ty Cobb.

In his rookie season, Cobb challenged the young Harris by sliding with spikes high into second base. Harris refused to flinch and tagged Cobb square in the back with his glove.

“The next time you try that, bush (short for bush leaguer), I'll carve you like a turkey,” said Cobb.

“The next time, old man, that you come at me like that I'm going to hit you right between the eyes with the ball,” Harris replied. Cobb later went on to say that he always respected Harris after that play.

When Griffith made Harris player-manager in 1924, Harris inherited a team stacked with future Hall of Famers like Goose Goslin, Sam Rice and the great Walter Johnson, who was 36 years old by that time. Still, the Senators were picked to finish in the American League’s second division. Harris quickly earned the respect of his teammates and was among the first managers to employ relief pitchers on a regular basis. When the regular season was over, Harris’ Senators had edged Babe Ruth and the defending World Champion New York Yankees by two games.

It was in the 1924 World Series against John McGraw’s heavily favored New York Giants that Harris cemented his storybook season with a stellar performance. The light-hitting second baseman slugged two homers in the series and batted .333, while also setting Fall Classic records for chances accepted, double plays and putouts. In Game 7, Harris brought Johnson, who had lost Games 1 and 5, on in relief to work the ninth inning. The Senators’ elder statesman kept the Giants at bay until the bottom of the 12th, when Earl McNeely sealed Washington’s only World Series title with an RBI double. Harris became the youngest manager to win a world championship.

“Walter was my best bet,” Harris said of his decision to use Johnson. “That’s why I put him in. Anyone who thought Walter was through was a fool. I knew he was all right.”

Harris led the Senators to a second straight pennant in 1925 before losing to Pittsburgh in Game 7 of the World Series. He managed for three more seasons in Washington until he was traded to Detroit following the 1928 season. Harris went on to manage five years with the Tigers and one with the Red Sox before returning to his second tour in the nation’s capital in 1935.

After a half-season with the Phillies in 1943, Harris returned to baseball as the Yankees’ skipper in 1947. Just like his first managerial season in Washington, the Boy Wonder led the Bronx Bombers to a World Series title in his first year at the helm.

“If you can’t play for Bucky, you don’t belong in the major leagues,” said Yankees star Joe DiMaggio.

Harris managed for one more season in New York, then returned to his old home at Griffith Stadium for his third stint with the Senators in 1950, then managed the Tigers again in 1955 and 1956

“Only Franklin D. Roosevelt had more terms than I did in Washington,” Harris remarked.

When he retired, after 40 total years in baseball, he was the third-winningest manager in history with 2,158 victories. 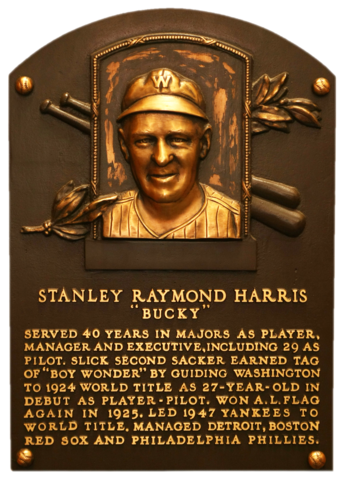 that at the age of 13, Bucky Harris began working as a breaker boy in the coal mines near Pittston, Pa.?

"He studies baseball as a medical student studies anatomy. He seems to be able to get the best out of mediocre talent. "
columnist, Quentin Reynolds