Few managers won as consistently as Southworth, who spent 25 seasons as a player and/or manager in the major leagues.

Southworth began his pro baseball career in 1912 and appeared in one game with the American League's Cleveland Naps in 1913. After some additional time in the minor leagues, Southworth hit .220 in 60 games with Cleveland in 1915. He spent the next two seasons in the minors before getting a chance with the Pittsburgh Pirates in 1918, where he hit .341 in 64 games. From there, Southworth became a regular, leading the NL with 14 triples in 1919 and hitting .284 in 146 games in 1920.

Prior to the 1921 season, the Pirates traded Southworth and two other players to the Braves for future Hall of Fame shortstop Rabbit Maranville. He played three seasons for the Braves before landing in New York with the Giants, with whom he appeared in the 1924 World Series. Southworth was traded to the Cardinals during the 1926 season and hit .345 while appearing in all seven games of the 1926 World Series, helping St. Louis capture its first title.

Southworth would be part of two more in the years to come.

After the 1927 season, Southworth was offered a job as a player/manager in the Cardinals' farm system by St. Louis general manager Branch Rickey. Southworth managed Double-A Rochester in 1928, then took over as Cardinals manager in 1929 when he and Bill McKechnie – who had led St. Louis to the 1928 NL pennant – switched places. Southworth led the Cardinals to a 43-45 record before the Cardinals again made a switch, this time in the opposite direction as McKechnie returned to St. Louis and Southworth went back to Rochester.

Out of baseball for a time in the early 1930s, Southworth returned to the Cardinals as a minor league manager in 1935. By 1939, Southworth was back in Rochester – and the next season he re-took control of the Cardinals after Ray Blades was dismissed early in the season. Southworth led St. Louis to a 69-40 record the rest of the way and followed that up with 97 wins and a second-place finish in 1941.

The Cardinals won 95 games in 1945 but finished second in the the NL behind the Chicago Cubs. Following the season, the Braves targeted Southworth to head their rebuilding effort, signing him to a three-year deal worth $100,000.

The Braves won 81 games in 1946 and 86 games the following year as they built a championship foundation. Then in 1948, Southworth's Braves won the NL pennant behind the "Spahn and Sain and Pray for Rain" combination of 24-game winner Johnny Sain and 15-game winner Warren Spahn. But the Braves lost the World Series to the Cleveland Indians four games to two as Sain and Spahn won once each but got little help.

Southworth took a leave of absence because of illness two-thirds of the way through the Braves 1949 season but, even then, his record still was 55-54. He returned for another full season in 1950, going 83-71 before lasting just 60 games in 1951 then stepping down again. 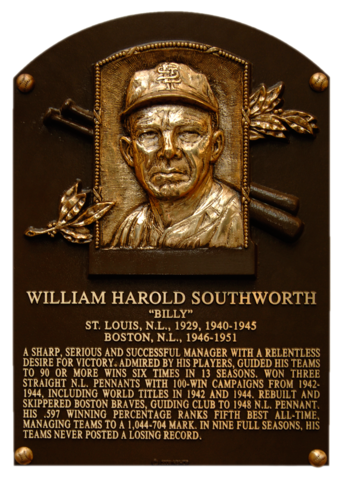 that among managers who began their careers in the dugout after 1900 and who have at least 1,000 wins, Billy Southworth’s winning percentage of .597 ranks second all-time to only Joe McCarthy’s .615?

"Billy's offensive philosophy was to bunt the ball and get the runner over. That's why we won. He taught the fundamentals. "
Danny Litwhiler