Pitching, defense and the three-run homer.

It was a formula that manager Earl Weaver and his Baltimore Orioles honed to perfection during their run as an American League powerhouse in the 1960s and 1970s.

The Orioles were stacked with talent when Weaver took over the club in 1968. Baltimore’s pitching staff featured three aces in Mike Cuellar, Dave McNally and Jim Palmer. The O’s also sported Gold Glove-caliber defenders like Davey Johnson, Mark Belanger, Paul Blair and Brooks Robinson. And it didn’t hurt to have sluggers like Frank Robinson and Boog Powell driving in the necessary runs from the middle of the lineup.

But this collection of talent still needed a leader, and that’s where Weaver came in. He was relaxed with his ballplayers and tough on umpires, and he eschewed small-ball tactics like stolen bases and hit-and-runs in favor of the big inning.

"Nobody likes to hear it, because it's dull, but the reason you win or lose is darn near always the same: Pitching,” Weaver told the Los Angeles Times.

Weaver was a struggling second baseman in the minor leagues who earned his first chance at managing in 1956 in the South Atlantic League. He slowly worked his way up the ladder while the Orioles stocked the farm system with players he would later manage in the big leagues.

After successful stints with Double-A Elmira and Triple-A Rochester, Weaver was named Baltimore's manager midway through the 1968 season. He took over an Orioles team that had won the 1966 World Series but had struggled for a year and a half. In 1969, Baltimore won a franchise-record 109 games and its first of three straight AL pennants. And a dynasty was born.

“(Weaver) does the best job of any manager I've ever known at keeping 25 ballplayers relatively happy,” Frank Robinson said. “He doesn't do it by being their friend; he does it by never, but never, taking anything personally and by making damn sure nobody else does either."

After a World Series defeat at the hands of the Amazin’ Mets in 1969, the Orioles roared back to beat the Cincinnati Reds in the 1970 Fall Classic. In 1971, Weaver’s team captured another AL pennant. Over those three seasons, the Orioles averaged 106 wins per season.

Weaver would eventually win another pennant with Baltimore in 1979 before retiring after the 1982 season. He returned to manage the Orioles in 1985 and 1986 before retiring again. His career winning percentage of .583 ranked sixth among managers with at least 1,000 wins at the time of his retirement. 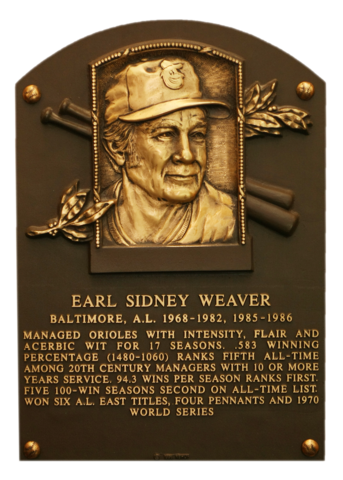 "Earl was a fun guy and a pretty shrewd manager. He always said what he thought and try to beat you any way he could. Earl was great for Baltimore, for sure. He was great for baseball. "
Yogi Berra 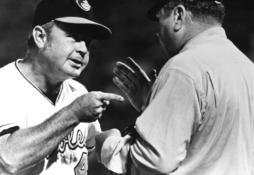 In 1968, Weaver began The Oriole Way in Baltimore