If Bill McKechnie knew one thing from his playing career during the Deadball Era, it was that shutting down the opponents’ hitters were the key ingredients to winning games.

Using pitching and defense as the backbone of his philosophy, McKechnie became a highly successful manager once his playing days were done.

McKechnie’s life in professional baseball began as a utility infielder for the Pirates in 1907. Though he hit .300 just once in his 11 years on the diamond, he posted a .954 fielding percentage while playing every position on the infield except catcher.

But it was on the bench where McKechnie made his biggest impact in the game. After managing the Federal League's Newark Pepper for 102 games in 1915 while still an active player, McKechnie took over a sub-.500 Pirates team and guided it to a 53-36 finish, good enough for a third place overall finish in the NL standings. Under the helm of the quiet McKechnie, the Pirates seemed to instantly improve and play harder – a trend that would continue at each stop in McKechnie’s career.

Known as “Deacon” for his unassuming demeanor and regular participation in the church choir, McKechnie molded his clubs into close-knit teams that excelled in tight contests. According to All-Star pitcher Johnny Vander Meer, McKechnie “knew how to hold on to a one- or two-run lead better than any other manager.”

McKechnie’s Pirates improved each year from 1922-25, culminating with 95 wins and a World Series title in 1925. Three years later, McKechnie took control of the Cardinals and immediately led them to the 1928 NL pennant. In the 1930s, McKechnie managed the Boston Braves for eight seasons before taking over the Cincinnati Reds in 1938. Inheriting a team that finished last in 1937, McKechnie led the Reds to 82 wins in 1938 and NL pennants in 1939 and 1940.

McKechnie mentored pitchers Bucky Walters and Paul Derringer and turned them into perennial All-Stars. Walters won the National League Most Valuable Player Award in 1939, while Derringer remarked that, “If a pitcher can't win for Bill McKechnie, he can't win for anybody.”

Following the lead of their two aces, McKechnie’s Reds led the league in team ERA and complete games in 1939-40. The Reds claimed their first pennant in 20 years in 1939, then followed up with 100 wins and a World Series victory against the Detroit Tigers in 1940. Walters and Derringer led the way, recording two victories apiece in the Fall Classic.

With the Reds’ October triumph, McKechnie became the first manager in history to win a World Series championship with two different teams. He managed for six more years in Cincinnati before retiring in 1946 with 1,896 victories – at the time the second-most in National League history behind only John McGraw.

After his managerial career, McKechnie remained in the game as a coach for five more seasons – including a third World Series title with the 1948 Cleveland Indians. 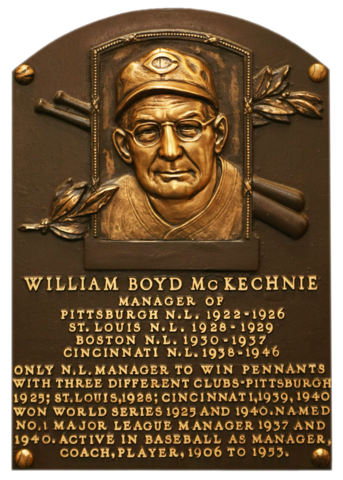 that Bill McKecknie earned the nickname Deacon because he sang in his church choir and generally lived a quieter lifestyle than most of the rough-and-tumble ballplayers of his era?

"He knew how to hold on to a one or two-run lead better than any other manager. "
Johnny Vander Meer