“Eddie used to take care of the whole outfield, not just center field. He was far and away the best outfielder I ever saw." – Heinie Groh

Edd Roush was a .300 hitter in both the Dead Ball and Live Ball eras. And by the time his 18-year big league career was over, Roush was widely recognized as one of the top batters – and outfielders – of his time.

Roush broke into the majors in 1913 with the White Sox. But when the team sent him back to the minor leagues in 1914, Roush jumped to the Federal League with the Indianapolis Hoosiers, hitting .325 in 74 games. The team moved to Newark in 1915 to become the Pepper, and the 22-year-old Roush hit .298 with 28 steals in 145 games. After the demise of the Federal League following the 1915 season, New York Giants manager John McGraw purchased Roush's contract for the 1916 season.

But Roush and McGraw did not get along, and on July 20 – with Roush batting .188 – McGraw sent future Hall of Famers Roush, Christy Mathewson and Bill McKechnie to the Reds in exchange for Buck Herzog and Red Killefer.

In Cincinnati, Roush blossomed. He captured the National League batting title in his first full season as a Red in 1917 with a .341 average. He won a second batting title in 1919 by hitting .321, missing the 1918 crown by falling just two points short of Zack Wheat's .335 average. In 1919, Roush helped the Reds defeat the infamous "Black Sox" in the World Series by scoring six runs and recording seven RBI in the eight-game series.

On the field, Roush was well known for playing the game with a hard-nosed style, even by the standards of the era. Growing up on a farm in Indiana, he developed extraordinary strength in his arms and hands, allowing him to wield a 48-ounce bat, one of the heaviest ever used.

Roush used an unusual hitting technique where he would move his feet after the pitcher released the ball, allowing him to adjust his swing and hit the ball to different parts of the field. He firmly believed that hitters shouldn’t hesitate to position themselves differently in batter’s box, depending on the pitcher. He was also an excellent defensive center fielder.

From 1920-25, Roush averaged .346 at the plate. Following the 1926 season, the Reds traded him back to the Giants – this time in another swap of future Hall of Famers, with George "High Pockets" Kelly going to the Reds.

Roush signed a three-year contract worth $70,000 and hit .304 over those three seasons, but injuries limited him to 301 total games. He sat out the 1930 season in a dispute over salary, returning to the Reds in 1931 for a final campaign. 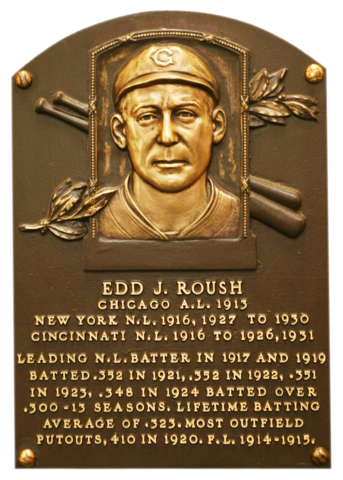 that Edd Roush, who used a massive, 48-ounce Louisville Slugger, claimed that he never broke a bat in his big league career?

"Eddie used to take care of the whole outfield, not just center field. He was far and away the best outfielder I ever saw. "
teammate Heinie Groh