Ernest Judson Wilson was known throughout the Negro Leagues as “Boojum” because of the sound of his hits bouncing off outfield walls. One article stated that he was “probably the hardest hitter Negro baseball has seen.”

Over a Negro Leagues career that lasted 21 seasons, Wilson hit .400 three times and was one of the most respected players in the game.

According to outfielder Ted Page, “Wilson was strong enough to go bear-huntin’ with a switch.” None other than the great Satchel Paige considered Wilson to be among the best hitters he ever faced,

Fearless and aggressive, Wilson terrorized pitchers with his hitting and umpires with his reputation for arguing almost every call. He was wide-shouldered and short-legged, standing only 5-foot- 8 and weighing 190 pounds. Batting left-handed, he played in both the Negro Leagues and the Cuban Winter League following a stint with the U.S. Army during World War I.

From the early 1920s through the end of World War II, Wilson starred for some of the greatest teams in all of black baseball, including the Baltimore Black Sox, Homestead Grays, Pittsburgh Crawfords and Philadelphia Stars. He regularly topped the .300 mark in batting average.

At third base, Wilson often used his chest to stop hard-hit balls. In the batter's box, he would crowd the plate – ensuring that he was hit by pitches on a regular basis. However, he was known for playing through the many injuries and for a fierce competitive drive that he used to incite teammates to work harder.

Wilson passed away on June 24, 1963 and is buried at the Arlington National Cemetery in Virginia. He was elected to the Hall of Fame in 2006. 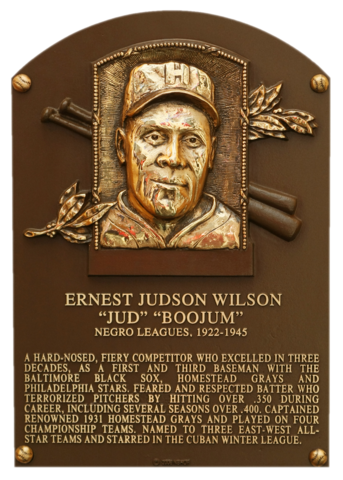 that at the age of 45, Jud Wilson hit .426 in a full season with the Homestead Grays?

"Boojum was a better hitter than Josh [Gibson]. He didn’t hit as many home runs, but he hit so many doubles and singles. "
Double Duty Radcliffe