Walter “Buck” Leonard was one of the best pure hitters to play in the Negro Leagues. He was also a key part of the Homestead Grays dynasty of the 1930s and 1940s.

The first baseman spent his entire 15-year career with the Grays, the longest term of service for a player with one team in Negro League history. He played in a league-record 11 East-West All-Star Games.

At the age of 45, with the color barrier broken, he was offered a major league contract, but turned it down. “In 1952, I knew I was over the hill,” Leonard said. “I didn't try to fool myself.”

League statistics have Leonard batting .345 for his career with a .589 slugging percentage over 2,541 plate appearances.

“Buck Leonard was as smooth a first baseman as I ever saw,” said booking agent Eddie Gottlieb. “In those days, the first baseman on a team in the Negro Leagues often played the clown. They had a funny way of catching the ball so the fans would laugh, but Leonard was strictly baseball – a great glove, a (heck) of a hitter, and drove in runs.”

Leonard wasn't able to get a high school diploma until the age of 52, because his hometown didn't have a high school that allowed education for African-Americans. Always an advocate for civil rights, he was an ambassador for Negro League baseball until his death at age 90.

In 1999, the Sporting News ranked the slugger No. 47 on its list of the 100 Greatest Baseball Players. He was one of only five men on the list who played most of, or their entire career in the Negro leagues. Leonard was also honored as a finalist for the Major League Baseball All-Century Team.

Leonard was elected to the Hall of Fame in 1972, the year after Satchel Paige became the first Negro Leaguer elected. He passed away on Nov. 27, 1997. 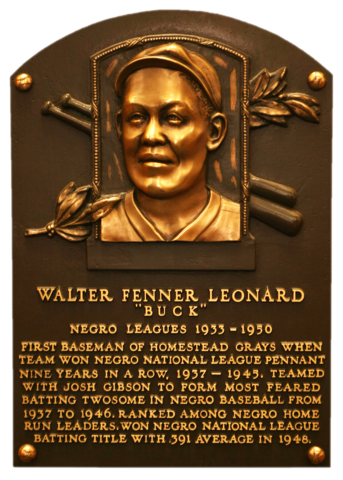 that Buck Leonard earned his high school diploma when he was 52 because his hometown of Rocky Mount, N.C., did not have a high school for African Americans when he grew up?

"Leonard was strictly baseball – a great glove, a (heck) of a hitter, and drove in runs. "
Eddie Gottlieb