“I’ve only known three or four perfect swings in my time. This lad has one of them.” – Ty Cobb

The “lad” the Georgia Peach was referring to was Eddie Mathews, who combined power and fielding ability at third base like few before or since. During a 17-year big league career (1952-68), spent mostly with the Braves, the hot corner star not only possessed a rocket arm and a gift for fielding, but the lefty swinger was a feared slugger who became the seventh player to reach the 500-home run mark.

“Mathews is the most dangerous hitter in baseball today,” was the assessment of Hall of Famer Rogers Hornsby way back in 1954. “And he’s going to get better because he wants to learn, because he’s always asking questions. He’s got power and he’s got rhythm, along with a fine level swing. Those big, powerful, awkward guys you see around who can bust a ball a mile are as good now as they’ll ever be. Mathews is different. He’s loose, limber and coordinated. He’ll be a star when most of the guys competing with him now aren’t even remembered.”

Mathews, the only member of the Braves to have played with the franchise while it called Boston, Milwaukee and Atlanta home, teamed up with Hank Aaron to form one of baseball’s most feared pair of homer-hitting teammates (hitting a record 863 while playing together). The two led the Braves to a pair of classic World Series appearances against the Yankees (1957-58), both going seven games, bringing a title to Milwaukee in 1957.

“At the start, Hank wasn’t the home run hitter he ended up to be,” Mathews said. “I was two years ahead of him but we were both starry-eyed kids. Later it became a friendly rivalry. It wasn’t that we tried to hit home runs because I don’t think you can. But we were in our own little competition.”

Mathews finished with 512 homers, including a streak of nine years in a row with at least 30, and his 47 in 1953 established a single-season record for third baseman that would last almost 30 years. A 12-time All-Star, Mathews led the NL in walks four times and twice finished second in the NL Most Valuable Player Award voting.

“The one thing I’m proudest of is that every day I played,” Mathews said, “I gave the best I had.” 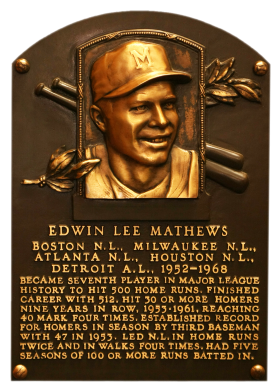 that Eddie Mathews was the only man to play for the Boston Braves, Milwaukee Braves and Atlanta Braves?

"I’ve only known three or four perfect swings in my time. This lad has one of them. "
Ty Cobb 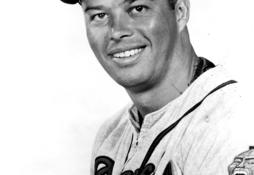 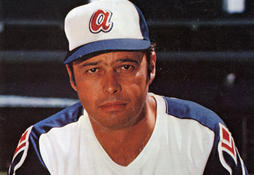 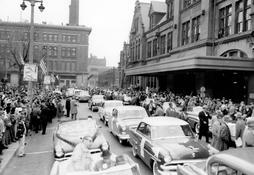 The Braves made waves in the baseball community when they moved from Boston to Milwaukee in 1953.
Explore more Inductees