Hugh Duffy was one of the top batsmen of the 1890s, recording more hits, home runs and runs batted in during the decade than any other player in the game.

He teamed with fellow Hall of Famer Tommy McCarthy to form the “Heavenly Twins” outfield tandem for the Boston Beaneaters that captured two league pennants and pre-modern World Series championships in 1892 and 1893.

Scouted by Cap Anson, Duffy was originally signed to play for the Chicago White Stockings in 1888. Not only could Duffy swing the bat, but he had terrific range in the outfield. Fred Clarke recalled “Duffy was a really great center fielder and an outstanding right-handed hitter. He was a choke hitter, who would rap hits everywhere with good power.”

In 1894, Duffy put together his finest season when he compiled a record .440 batting average on 237 hits, led the league in home runs with 18, knocked in 145 runs, hit 51 doubles and scored 160 times. On June 18 of that year he established a major league mark when he reached base safely three times in one inning.

“It’s very evident that when a batter has a bang-up season he must begin just right, find conditions favorable and go straight ahead through the season full speed,” Duffy said of the 1894 campaign. “That was what I did back there in ’94. I got away to a good start and I held my advantage.”

During his time as a coach, Duffy had the opportunity to mentor Ted Williams during Williams’ .406 season, in 1941. Duffy maintained that the Splendid Splinter was the best hitter he’d ever seen.

“Sir Hugh” holds the distinction of being the only player to bat .300 in four major leagues; the Players League, the American Association, the National League and the American League. As Duffy put it: “It just comes natural… You just walk up there and hit it. That’s all.” 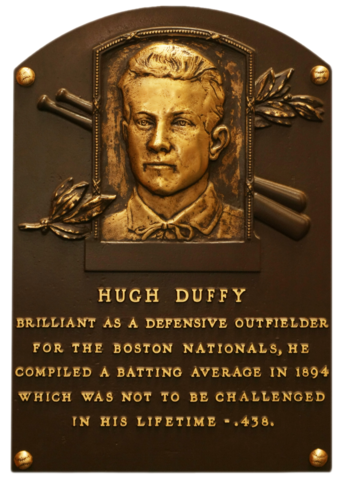 that on June 18, 1894, Hugh Duffy became the first player to reach base safely three times in one inning?

"As a youth he worked in a blue-dye shop, lifting heavy masses of wet cloth out of a machine that gave him remarkable strength in the wrists. "
Lee Allen, Historian, National Baseball Hall of Fame and Museum