The Yankees had Mickey Mantle, the Giants had Willie Mays and the Brooklyn Dodgers had “The Duke of Flatbush.”

At the time when there were three New York baseball teams, the team that had your allegiance was as important in the five boroughs as life itself, and in the 1950s nobody represented Brooklyn baseball more than Duke Snider. Those team rivalries of yesterday were immortal. Willie Mays recalled: “Duke was a fine man, a terrific hitter and a great friend, even though he was a Dodger.”

Edwin Donald Snider was called Duke his entire life. He got the nickname from his parents as a young boy because of the way he strutted around like he was royalty. On the baseball field, Duke was royalty. He gracefully patrolled center field in Brooklyn and was one of the most prolific power hitters of the 1950s, as he hit more home runs and had more RBI in the decade than any other player.

Duke’s star seemed to have shone brightest when the pressure was on. In 1949, on the season’s final day, he drove in the winning run to clinch the pennant for the Dodgers. In 1955, he led Brooklyn to their one and only World Series victory over the Yankees. In total, Snider hit .286 with 11 home runs and 26 RBI in 36 World Series games, and is the only player to hit at least four home runs in two different Fall Classics (1952 and 1955).

In 1957, when the Dodgers played their final game in Brooklyn before moving to Los Angeles, it was Duke Snider that hit the last home run ever in Ebbets Field, and fittingly that home run was hit off another future Hall of Famer: Robin Roberts. In his career Snider hit 19 home runs off of Roberts – no other batter in major league history has hit that many home runs off of a single pitcher.

Tommy Lasorda, who played with Snider in Brooklyn in 1954 and 1955, recalled: “I was Duke’s teammate and looked up to him with respect. Duke was not only a great player, but he was a great person, too. He loved his family and loved the Dodgers. He was the true Dodger and represented the Dodgers to the highest degree of class, dignity and character.”

Snider remained with the Dodgers through the 1962 season, helping Los Angeles win the 1959 World series. He played his final two years with the Mets and Giants before retiring after the 1964 campaign. 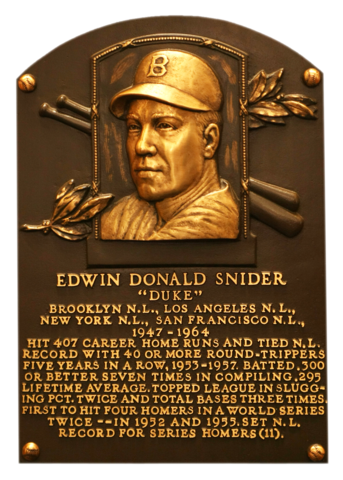 "The greatest catch I ever saw was one made by Snider in 1954, when he climbed the wall of Connie Mack Stadium like a mountain goat to take an extra base hit away from Willie Jones of the Phillies. "
Pee Wee Reese 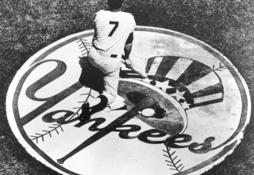 Character and Courage and Cooperstown

Like many Hall of Famers, Mantle, Mays and Snider overcame adversity to reach the Hall of Fame

In 1963, Duke Snider headed back to the city where it all began.
Explore more Inductees