The folksy, neighborly image we now have of the Brooklyn Dodgers was largely shaped by Wilbert Robinson, their manager from 1914-1931, during which time sportswriters began referring to the team as the “Robins” in his honor.

So lasting was the affectionate term that it evolved into the “flock” long after Uncle Robbie left the scene and the official nickname reverted to Dodgers. “Flock” was still regularly used in tabloid headlines until the team moved to Los Angeles following the 1957 season.

Robinson was the first 20th century Dodger to be elected to the Hall of Fame, and his feud with one-time teammate and business partner John McGraw helped make the Dodgers-Giants rivalry one of the greatest in baseball history.

In 1891, Robinson and McGraw became teammates with the Baltimore Orioles, a franchise that would go on to win two consecutive Temple Cups as baseball champions. This was a remarkable team which also featured future Hall of Famers Joe Kelley, Dan Brouthers, Willie Keeler, Hughie Jennings and manager Ned Hanlon. Robinson was the catcher, and while a lifetime .273 hitter, he topped .300 five times, and on June 10, 1892, experienced a 7-for-7 afternoon at the plate. That 7-for-7 performance in a nine-inning game remains in the record book – equaled only once, by Pittsburgh’s Rennie Stennett in 1975.

Robinson and McGraw became business partners in Baltimore with a café called The Diamond. When the National League cut back from 12 to eight teams in 1900, the two players were sold to St. Louis but happily returned to Baltimore a year later to play for the new American League Orioles (enabling them to keep a closer watch on their business).

McGraw quit the following summer, joining the National League's New York Giants to begin his 31-year reign as manager there, while Robinson stayed behind to finish out the season and begin his managing career.

After the Orioles moved to New York in 1903 – becoming the Highlanders and later the Yankees – Robinson all but left the game before reuniting full-time with baseball and McGraw in 1911 as a coach. Following the 1913 World Series, when the Giants lost to the A’s, the two got into an argument which caused their rift. A month later Robinson, was hired to manage the Dodgers, and from that point on, the two would smile for cameras but never completely reconcile.

By 1916, Robinson had molded the Dodgers into a pennant winner, bringing Brooklyn its first modern era National League title. They would capture the NL flag again in 1920.

Robinson stories quickly became a part of baseball lore. During Spring Training at Daytona Beach, Fla. in 1915, Robinson agreed to use his old catching skills to snare a baseball dropped 525 feet from an airplane. The stunt went bad when the pilot, Ruth Law, instead dropped a grapefruit, which exploded on impact and left Robinson temporarily believing that he was seriously wounded. Such was the stuff of a growing Brooklyn legend. 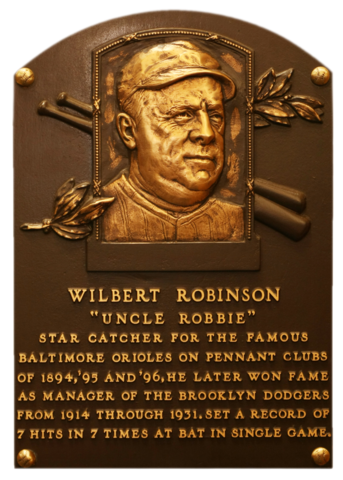 that Wilbert Robinson set a record with seven hits in a nine-inning game on June 10, 1892?

"Robbie was a rule-of-thumb manager, a gentle Falstaff, who could get more out of less material than any manager before or since. "
Tom Meany, Saturday Evening Post, March 1937