"I used to chew slippery elm - the bark, right off the tree. Come spring the bark would get nice and loose and you could slice it free without any trouble. What I checked was the fiber from inside, and that's what I put on the ball. The ball would break like hell, away from right-handers and in on lefties." – Burleigh Grimes

A noted spitballer, Grimes' career began in 1916 with the Pittsburgh Pirates. In two seasons with the Pirates, Grimes would accumulate a 5-19 record. That led to a departure from the Steel City. The Pirates traded Grimes to the Brooklyn Robins (which would later become the Brooklyn Dodgers) and he immediately dispelled any doubts about his ability to pitch.

Grimes' first season with the Robins was impressive as he racked up a 19-9 record. He would play eight more seasons in Brooklyn, totaling an additional 139 wins while leading the National League in complete games three times (1921, 1923, 1924), innings twice (1923, 1924) and both wins (1921) and strikeouts (1921) once. It was during this period that MLB banned the spitball, but allowed Grimes and 16 other pitchers to continue utilizing the pitch.

The final eight years of Grimes' career was spent on the move, as he played for the New York Giants, Pittsburgh Pirates, Boston Braves, St. Louis Cardinals, Chicago Cubs and New York Yankees. His most noteworthy effort came in his second stint with the Pirates in 1928 when he again paced the NL in wins (25), games (48), complete games (28) and innings pitched (330.2). In 1931 as a member of the St, Louis Cardinals, Grimes claimed his first and only championship, as he won both of his starts in the World Series versus the Philadelphia Athletics.

After his playing career ended in 1934, Grimes would go on to manage in the major leagues – leading the Dodgers in 1937 and 1938. Grimes would continue his managing career primarily in the International League with the Toronto Maple Leafs. 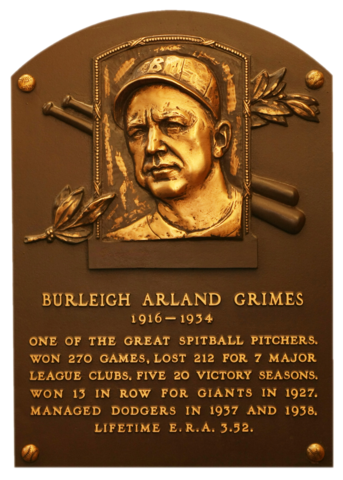 that Burleigh Grimes was the last pitcher allowed to throw the spitball in big league history?

"The only time I was ever scared in my life was one time when Burleigh threw at me on a 3-and-0 count. "
Frankie Frisch