From there, the slick-fielding shortstop known as “Beauty” was well on his way to the Hall of Fame.

Bancroft, who spent 16 big league seasons as a player and led four of his teams to NL pennants, was born April 20, 1891, in Sioux City, Iowa. He soon displayed keen hand-eye coordination that led to a career on the diamond.

Bancroft made his professional baseball debut in 1909 with Duluth of the Minnesota-Wisconsin League, then quickly joined Superior of the same league. In 1912, Bancroft was drafted by Portland of the Pacific Coast League – and after three seasons was sold to the Phillies before the 1915 campaign.

Bancroft quickly solidified Philadelphia’s infield, accepting a remarkable 892 chances at shortstop in that 1915 season to lead the Phillies into the World Series. Bancroft hit .294 in the Fall Classic, but the Phillies fell to the Red Sox in five games.

Over the next four years, Bancroft established himself as one of the National League’s best-fielding shortstops – and also as a consistently effective hitter. But in 1920, a contract dispute resulted in Bancroft’s trade to the Giants for Art Fletcher in a swap of shortstops.

The next season, Bancroft hit .300 for the first time (.318) while scoring a career-best 121 runs for the World Champion Giants. New York repeated as Fall Classic champions in 1922, with Bancroft hitting .321 with 209 hits and 117 runs scored. In the field in 1922, Bancroft accepted 1046 total chances, including 405 putouts – the fourth-best total among modern era shortstops. His 984 non-error total chances are the most for any shortstop in any season.

Injuries limited Bancroft to 107 games in 1923, and after that season – where Bancroft helped the Giants to their third straight NL pennant – he was traded to the Braves in a deal where Boston also received Casey Stengel. In Boston, Bancroft took over as player-manager and managed the Braves for four full seasons.

Bancroft finished out his playing career with two seasons in Brooklyn before a final campaign with the Giants in 1930. He retired with a .279 average, 2,004 hits, 320 doubles and 1,048 runs scored. In the field, Bancroft led all NL shortstops in putouts four times, assists three times and fielding percentage twice. His 4.623 career putouts at shortstop rank third on the all-time list. 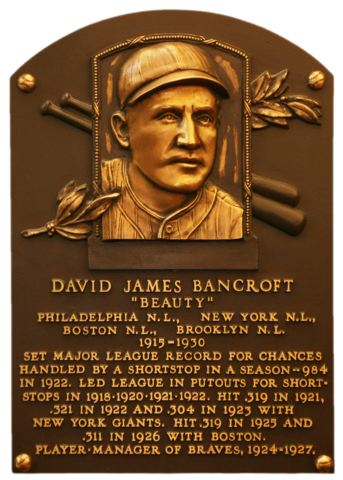 that Dave Bancroft holds the single-season record for most total chances by a shortstop with 1046 in 1922?

"When he came to the Phillies from Portland of the Pacific Coast League, he brought with him a habit of shouting ‘Beauty’ every time his pitcher sent over a good looking ball. That’s the history of the ‘Beauty’ handle. "
Dan Daniel, New York Herald, July 30, 1922