"The best outfield trio I ever saw? That's easy. Speaker, Lewis and Hooper – and the greatest of those was Hooper." – Red Sox manager Bill Carrigan

Harry Hooper arrived in Boston for his first full season in 1910, joining Tris Speaker and Duffy Lewis in the outfield for a six-year run. The trio was dubbed the "Million-Dollar Outfield" and won two World Series together. Hooper added two more after Speaker and then Lewis left.

While Speaker was clearly the outfield's headliner, Hooper proved to be an outstanding player as well. He was known for his defense in right field and for being one of the better leadoff hitters of his time. Hooper hit .311 in 1911, the first of five times in his career he would hit better than .300. He took a step back at the plate in 1912, hitting .242 when the Red Sox won their first AL pennant in his time with Boston, but made up for it with a .290 average in the World Series.

Hooper bounced back in 1913, hitting .288 and scoring 100 runs for the first time in his career. Then in the 1915 World Series, Hooper hit .350 with two home runs as Boston defeated Philadelphia in five games.

Like the other two members of the Million-Dollar Outfield, Hooper eventually departed Boston. He joined the White Sox for the 1921 season, playing the final five years of his career in Chicago. Hooper retired in 1925 with a career .281 batting average and 1,429 runs scored.

In 1931, Hooper became Princeton's baseball coach, a position he held for two years. He also served as the postmaster for Capitola, Calf., for more than 20 years. 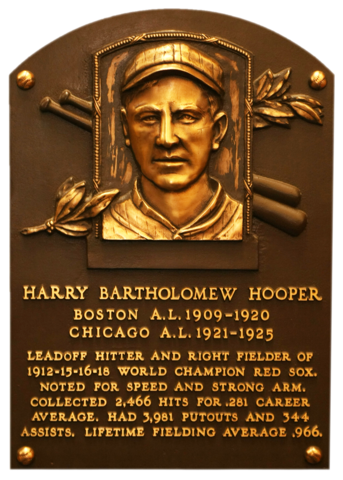 That on May 30, 1913, Harry Hooper became the first big leaguer to lead off each game of a doubleheader with a home run?

"If there was any one characteristic of Harry Hooper's, it was that he was a clutch player. When the chips were down, that guy played like wildfire. "
Joe Wood