Ty Cobb may have been the best all-around baseball player that ever lived. But one thing is for sure: Cobb had a burning desire to win.

"I never could stand losing,” he said. “Second place didn't interest me. I had a fire in my belly."

Born on Dec. 18, 1886 in Narrows, Ga., Cobb grew up with a demanding father who would accept nothing but success. The drive to please his father remained with Cobb long after his father’s death and contributed to his intense drive to be the best.

After spending time in the South Atlantic League and with some semipro teams, Cobb joined the Detroit Tigers in 1905. He spent 22 seasons in Detroit and another two in Philadelphia before retiring as the holder of 43 major league regular season career records, including the all-time batting average mark of .366.

Cobb was known for his aggressive base running style and his ability to hit to all fields. He won nine consecutive AL batting titles from 1907 to 1915 and three more in his career. He hit .320 or better for 22 consecutive seasons including over .400 three times.

In 1909, he led the league in home runs for the only time in his career and won the Triple Crown. Cobb’s best offensive season was 1911 when he led the AL in every major offensive category except home runs including hits, runs, RBI, batting average and slugging percentage. He was named AL MVP.

"He didn't outhit and he didn't outrun them, he out thought them," said Hall of Fame teammate Sam Crawford.

Spending most of his career in the outfield, Cobb helped the Tigers win three American League pennants from 1907-09 and served as player-manager of the Tigers from 1921-1926.

"I never saw anyone like Ty Cobb. No one even close to him. He was the greatest all time ballplayer. That guy was superhuman, amazing," said Hall of Fame manager Casey Stengel.

In 1936, the first balloting was held for election to the National Baseball Hall of Fame and Museum. Cobb received the most votes of the five electees.

“The greatness of Ty Cobb was something that had to be seen, and to see him was to remember him forever,” said fellow Hall of Famer George Sisler. 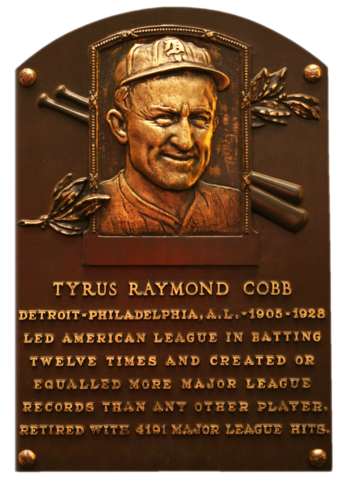 "He was the best ballplayer I ever saw. I always said if there was a league higher than the Majors, Ty Cobb would be the only fellow in it. Just as you’d be thinking about doing something, Ty would be doing it. He was always one step ahead of you. "
Joe Wood 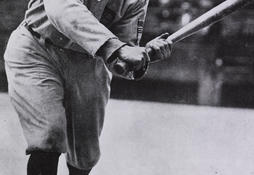 Ty Cobb proved he could be successful even in the new Live Ball era, recording a three-homer game on May 5, 1925.

Ty Cobb made his home debut for the Philadelphia Athletics on April 20, 1927.
Explore more Inductees