Playing most of his career in the pre-Negro Leagues era, Pete Hill emerged from the backwoods of Culpeper County, Va., to become one of the most feared line-drive hitters in the game. His baseball years run roughly from 1889 to the mid-1920s and involve some of the pioneer programs of African-American baseball.

Hill was considered to be a premier center fielder with a rocket arm and excellent glove. His talents also extended to the batter’s box, where he was a consistent line-drive hitter with outstanding speed on the base paths.

One quote from the book "Shades of Glory: The Negro Leagues and the Story of African-American Baseball" describes Hill as a “restless type, always in motion, jumping back and forth, trying to draw a throw from the pitcher.”

Baseball historian Jim Riley has said that if an all-star outfield was created from the pre-1920 era, it would include Ty Cobb, Tris Speaker and Pete Hill. The Chicago Defender supports this, as noted from an article in 1910: Hill can “do anything a white player can do. He can hit, run, throw and is what is termed a wise, heady ballplayer.”

Hill played for some legendary teams, including the Pittsburgh Keystones, Cuban X Giants, Philadelphia Giants, Leland Giants and the Chicago American Giants. His knowledge of the game was also noted as his closed his career by serving as the player-manager for the Detroit Stars, Milwaukee Bears and the Baltimore Black Sox.

After retiring from baseball and moving to Buffalo, he also helped form the Buffalo Red Caps. There was no part of the game in which he not involved.

In 1944, future Hall of Famer Cumberland Posey selected Pete Hill to his All-Time All-Star team and referred to Hill as “the most consistent hitter of his lifetime.”

“A lot of people forget about the baseball players who were pioneers of the game. They’re forgotten like they never existed, but they were part of American history,” say Hill’s great nephew Ron Hill, “How can you talk about baseball without talking about Pete Hill?”

As for his final legacy, perhaps the Chicago Defender summed it up best in 1951 when sportswriter Fay Young said that Hill “helped put Negro baseball on the map.” 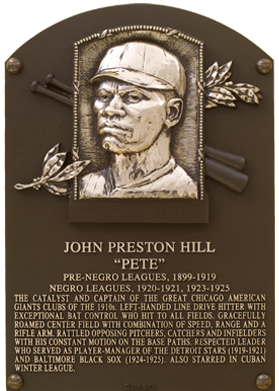 that in 1944, future Hall of Famer Cumberland Posey named Pete Hill to his All-Time All-Star team?

"[Hill] can do anything a white player can do. He can hit, run, throw and is what is termed a wise, heady ballplayer. "
Chicago Defender (1910)