The younger half-brother of Negro Leagues legend and founder Andrew “Rube” Foster, Bill Foster was a tall left-handed pitcher who played from 1923-37. For much of that time, he was considered the best lefty in the Negro Leagues.

According to Hall of Fame umpire Jocko Conlan, “Foster had the same perfect delivery of Herb Pennock, but was faster by far, with a sharp curve, and had what all great pitchers have – control.”

Foster could throw extremely hard, but he was a pitcher, not just a thrower. His repertoire included the fastball, curve, slider, a drop ball and – most importantly – a phenomenal change-of-pace. Manager Dave Malarcher called him “the greatest exponent of the change-of-pace. He could throw you a fast ball with maybe six or eight changes of speed.”

According to Hall of Famer Hilton Smith, Foster would throw his high curve for a called strike: “Then when he got ready for you to swing, he’d start it ‘round your waist and the catcher would catch it in the dirt. You couldn’t hit it with anything.”

Foster starred for his brother’s Chicago American Giants through much of the 1920s, helping the team to pennants in 1926, ’27, and ’33. The 1926 season and postseason may have been his greatest. He won 26 consecutive games (both league and non-league games) during the season. In the playoff between the Giants and the first half-season winning Kansas City Monarchs, the Giants needed to win both games to take the pennant. Foster started and won both games of the doubleheader, both against future Hall of Famer Bullet Rogan.

The American Giants then advanced to the World Series, defeating the Bacharach Giants while Foster won two games, pitched in two others and posted an ERA of 1.27.

Foster was the winning pitcher for the West in the first East-West All-Star Game, going the distance against a formidable opposing lineup. He appeared in the midsummer classic again the following year. Foster briefly served as a player-manager in 1931 for the American Giants, but resigned in order to concentrate on pitching. He played winter ball in Cuba and California.

Foster was dean of men and baseball coach at Alcorn State College from 1960 until he passed away on Sept. 16, 1978. He was elected to the Baseball Hall of Fame in 1996.

“He gave our best teams fits,” said Hall of Famer Cumberland Posey. He was “the hardest man in baseball to beat.” 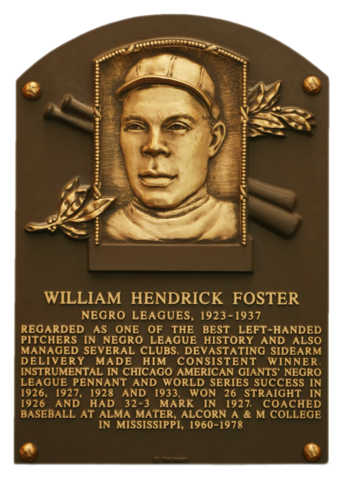 that Bill Foster coached baseball at his alma mater, Alcorn State College, from 1960-78?

"All the years I played, I never got a hit off him. He threw fire. "
Buck Leonard