Harmon Killebrew was one of the most feared sluggers of the 1960s – and when he retired in 1975, he had accumulated more home runs than any right-handed batter in American League history.

It was on the high school ball fields of the small mid-western town of Payette Idaho, where Killebrew was discovered by the Senators in 1954. The 17-year-old slugger signed on with the club for a large bonus and the rules of the day dictated that the team had to keep the youngster on the major league roster for two years or risk losing him to another team.

It was the nature of his tape measure home runs combined with the first five letters of his last name that the nickname “Killer” was born. Longtime Senators and Twins owner Calvin Griffith remarked “He hit home runs like few people can in the category of height and distance. Harmon didn’t hit many line drive home runs. He would hit the ball so blooming high in the sky, they were like a rocket ship going up in the air.

Over the course of his 22- year big league career, Killebrew put together eight 40-home run seasons and 44 multiple home run games. He led the AL in home runs six times, walks four times and RBI three times. He led the Twins to the Postseason three times, including in 1969 when he was named the American League's Most Valuable Player.

Although he was known as “Killer” at the plate, Harmon Killebrew was a gentle and quiet man off the field. When asked what he liked to do for fun, he once replied "Well, I like to wash dishes, I guess."

Former Twins Public Relations Director Tom Mee once said of Killebrew: “He is one of the finest individuals in the major leagues… to know Harmon Killebrew is to be a Killebrew fan.” 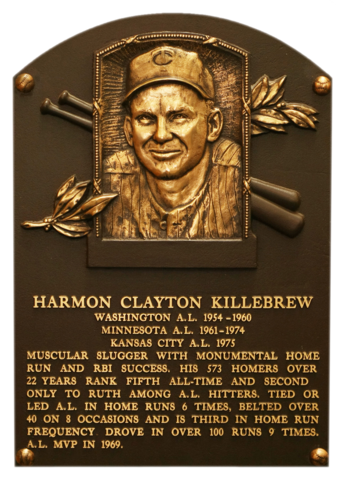 that on June 3, 1967, Harmon Killebrew blasted the longest home run ever hit at the Twins' old park – Metropolitan Stadium – a shot that landed in the second deck of the bleachers?

"He hit line drives that put the opposition in jeopardy. And I don't mean infielders, I mean outfielders. "
Ossie Bluege 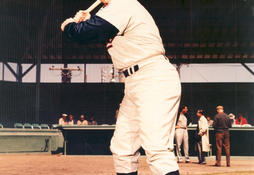 Killebrew fulfilled his inevitable legacy of joining the 500 home-run club on Aug. 10, 1971. 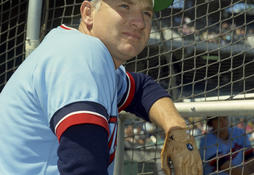 Killebrew’s career was a portrait of power

Harmon Killebrew played 22 seasons in the big leagues before retiring after the 1975 season.
Explore more Inductees