"If I needed one player to do the job of winning the game I needed to win, that player would be Frank Frisch." – Joe McCarthy

Frankie Frisch was a collegiate sports superstar, playing for Fordham University's baseball, basketball, football and track teams. His remarkable speed would earn him the nickname "Fordham Flash." Frisch would not finish his undergraduate career at Fordham, however, instead choosing to sign a contract with the New York Giants in 1919.

The Giants wasted no time with Frisch, placing him directly on the major league squad instead of seasoning him in the minors. At first glance the effort seemed to be a failure; Frisch hit only .226 in an abbreviated season. But in 1920, Frisch rewarded the Giants' investment. In his first full season, Frisch hit .280 and drove in 77 runs to go along with 34 stolen bases. His effort in 1921 would prove even better, as Frisch batted .341 and stole 49 bases to lead the National League. He would capture two more stolen base titles in 1927 and 1931, but not with the New York Giants.

Despite winning back to back World Series with the Giants (1921, 1922) and being named captain by manager John McGraw, Frisch's time in New York would come to an unceremonious end. After a Giants loss in the latter half of the 1926 season, McGraw argued with Frisch in front of his teammates. Frisch responded by leaving the team and heading home to New York City. He would eventually return to the Giants, but McGraw and Frisch's relationship was never the same.

The Giants would trade Frisch along with pitcher Jimmy Ring to the St. Louis Cardinals for Rogers Hornsby after the 1926 season. In 1927, Frisch, always known for his stellar glove work, posted one of the best defensive efforts ever, setting the record for most assists in a single season by a second baseman (641). He also won the National League Most Valuable Player Award with the Cardinals in 1931 while helping them capture the World Series both that year and in 1934.

Frisch was named the Cardinals' player/manager in 1933 and later managed the Pirates and Cubs, posting a career record of 1,138-1,078 over 16 seasons. 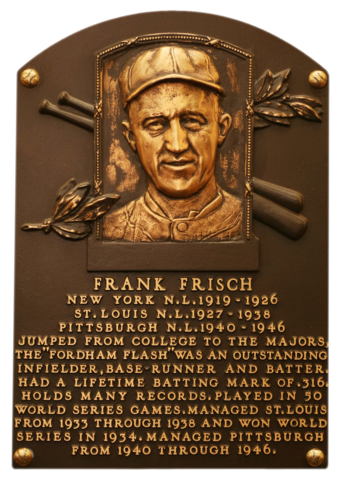 that Frankie Frisch's season strikeout total topped 20 only twice in his 19-year career?

"His range was such that he played second base, some of center field and a slice of right field, too. "
sportswriter Damon Runyon 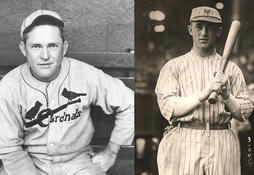 In a rare Hall of Famer-for-Hall of Famer swap, the Cardinals sent Rogers Hornsby to the Giants in exchange for Frankie Frisch on Dec. 20, 1926.
Explore more Inductees