For most of his career, the only time the word “second” appeared in the same sentence as Roberto Alomar was when someone was describing his position in the field.

At the plate, with the leather or in the final standings, Alomar was usually on top.

Born Feb. 5, 1968 in Ponce, Puerto Rico, Alomar had baseball in his blood. His father, Sandy Alomar Sr., was an All-Star second baseman in his 15-year major league career. Like his father, Roberto played second, threw right-handed and switch-hit. Alomar’s brother, Sandy, Jr., also starred in the big leagues as a catcher.

At 18, Roberto Alomar signed with the San Diego Padres and won the California League batting title in his second year in the minors with a .346 batting average. By 1988, he was with the parent club, making a splash with his defense and speed and finishing fifth in National League Rookie of the Year voting. He earned his first All-Star selection in 1990.

Following that season, Alomar was traded to Toronto – where his offense took off. Alomar raised his average over .300 in 1992-93, helping the Blue Jays to back-to-back World Series titles while finishing in third in the AL batting title race in 1993 with a .326 mark. He hit a combined .354 in four postseason series in those two championship seasons,winning ALCS MVP honors in 1992.

“Everybody can see the skills on the field,” said teammate Dave Winfield. “He’s acrobatic, flamboyant, he’s got his style.”

“He reminds me of some of the great players that I’ve played with, who seem like they write their own script,” said Davey Johnson, who managed Alomar with the Orioles. “Frank Robinson’s one, Henry Aaron was the other.”

Teamed with Omar Vizquel, the double-play combo won three consecutive Gold Glove Awards together. The Indians advanced to the postseason in both 1999 and 2001.

Alomar was traded to the Mets following the 2001 season before later stops with the White Sox and Diamondbacks. He retired during Spring Training of 2005.

Alomar was elected to the Hall of Fame in 2011. 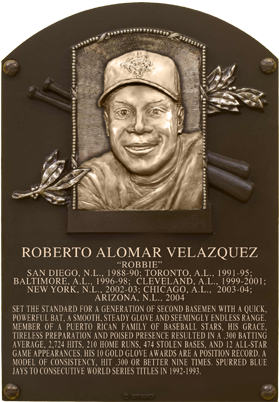 that Roberto Alomar and brother Sandy Jr. were teammates with the Padres, Indians and White Sox?

"He is one of the most talented guys I ever played with and against. He was great at the plate and in the field and made plays at second base that I never saw anyone else make. "
Cal Ripken Jr. 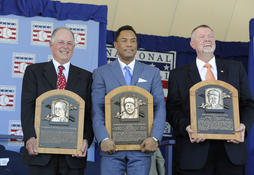 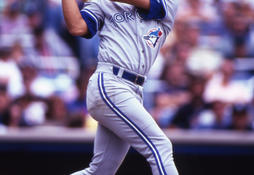 On Dec. 5, 1990, the Blue Jays acquired Roberto Alomar and Joe Carter from the Padres in a deal that set the stage for Toronto's back-to-back World Series titles.