"I patterned my life after Buck O'Neil," Hall of Famer Ernie Banks told the Associated Press at O’Neil’s funeral in 2006. "He was a marvelous man. Buck had so much love for everybody, in my life I became the same way. Hey, let's play two. Buck was a role model for my life. He was the greatest ambassador for the game.”

John Jordan “Buck” O’Neil was born Nov. 13, 1911, in Carrabelle, Fla. The family later moved to Sarasota, where he spent much of his childhood. O’Neil, the grandson of a slave, was not allowed to enroll at Sarasota High School because he was Black, so he attended Edward Waters College in Jacksonville instead.

O’Neil got his start in semipro ball before spending time with various barnstorming and minor league clubs. He broke into the Negro American League with the Memphis Red Sox in 1937, then latched on at first base for the Kansas City Monarchs in 1938. He would remain with the club for nearly two decades.

From 1939-42, the Monarchs captured four consecutive Negro American League pennants, sweeping the Homestead Grays in the Negro League World Series in 1942. But O’Neil had to step away from baseball in 1943 when he was drafted into the Navy. The year he returned, 1946, Kansas City reached the World Series again, this time falling to the Newark Eagles in seven games.

In 1948, O’Neil was named player-manager of the Monarchs – a role he would hold until 1955. O’Neil discovered and developed a number of future talents, including Banks and Elston Howard, who would become the first Black player for the New York Yankees.

O’Neil departed Kansas City in 1955 and signed on as a scout for the Chicago Cubs. There, he continued to prove his ability for talent identification, signing future big leaguer Oscar Gamble and future Hall of Famer Lou Brock.

The Cubs promoted O’Neil to their major league coaching staff in 1962, making him the first Black coach to serve on an AL or NL roster.

He returned to scouting in 1964 and later signed future Hall of Famer Lee Smith before the Royals brought him back to Kansas City as a scout in 1988.

Upon his return to Kansas City, O’Neil was determined to create a permanent museum to honor the legacy of the Negro Leagues. The Negro Leagues Baseball Museum, located in the 18th and Vine neighborhood of downtown Kansas City, was established in 1990, with O’Neil serving as chairman.

“Sometimes, I think God may have kept me on this Earth for a long time so I could bear witness to the Negro Leagues,” O’Neil once told the Kansas City Star.

When 17 Negro Leagues legends were inducted into the Hall of Fame in 2006, O’Neil came to Cooperstown for the Induction Ceremony and spoke on their behalf.

“I’ve done a lot of things I really liked doing,” O’Neil said in his speech. “But I’d rather be right here, right now, representing the people who helped build a bridge across the chasm of prejudice.”

O’Neil was posthumously awarded the Presidential Medal of Freedom by President George W. Bush. In 2008, a Buck O’Neil statue was dedicated in the Hall of Fame, and the Buck O’Neil Lifetime Achievement Award was established. The award honors “an individual whose extraordinary efforts enhanced baseball's positive impact on society, broadened the game's appeal, and whose character, integrity and dignity are comparable to the qualities exhibited by O'Neil.”

O’Neil’s contributions to baseball spanned across eight decades. He was a masterful identifier of talent and a skilled coach and player who broke down barriers for others and made it his life’s mission to honor the legacy of the Negro Leagues.

"It's no wonder that baseball is considered America's pastime. Buck was one of its architects. He helped shape the game,” Brock said. "But even greater, he shaped the character of young Black men. He touched the heart of everyone who loved the game. He gave us all a voice that could be heard on and off the field. We who were close to him will forever seek to walk in the shade of his shadow." 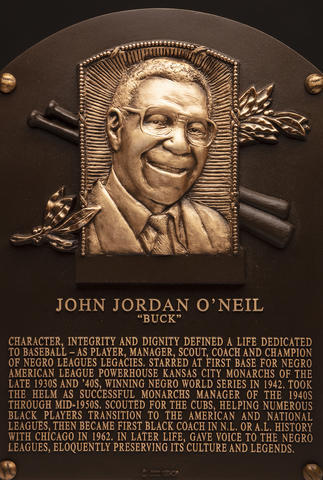 that Buck O'Neil was the first Black coach to serve on an AL or NL roster?

"It's no wonder that baseball is considered America's pastime. Buck was one of its architects. He helped shape the game. But even greater, he shaped the character of young Black men. He touched the heart of everyone who loved the game. He gave us all a voice that could be heard on and off the field. We who were close to him will forever seek to walk in the shade of his shadow. "
Lou Brock