The business of baseball, with some minor exceptions, was largely controlled by management for almost 100 years.

Miller served as the executive director for the Major League Baseball Players Association from 1966-82 – a time of unprecedented growth for the game.

Miller was born in Brooklyn, N.Y., on April 14, 1917, and graduated from New York University in 1938 with a degree in economics. He worked for the government for nine years, including a stint at the National War Labor Board. He then worked as a labor economist for the International Association of Machinists, the United Auto Workers and the United Steelworkers of America – becoming the latter’s lead negotiator.

In 1966, Miller was elected head of the MLBPA – an organization which never had a full-time representative.

“The biggest problem in the beginning was the low self-esteem of the players,” Miller said. “They had been so beaten down that they really didn’t understand their value in the game.”

Miller, however, quickly changed the players’ thinking. By 1970, Miller had increased the minimum salary by more than 25 percent to $10,000 and won the right for the players to seek arbitration to resolve contract disputes. Miller counseled Curt Flood during his Supreme Court case against the reserve clause – the provision which bound players to their teams forever – preparing Flood for an eventual loss but using the case as a trial ground for future action.

In 1975, that action came when Miller and the union tested the reserve clause through arbitration. Pitchers Andy Messersmith and Dave McNally played the 1975 season without signing their contracts, then contended that they were free agents due to the wording of reserve clause. Arbitrator Peter Seitz agreed, and suddenly baseball’s economic structure was thrown on its ear.

Miller’s tenure also included steering the union through work stoppages. In 1982, Miller stepped down as the head of the MLBPA.

“I take a great deal of satisfaction in what we accomplished,” Miller said. “The changes that needed to be made were so fundamental and basic that it didn’t take a rocket scientist to say what needed to be changed.” 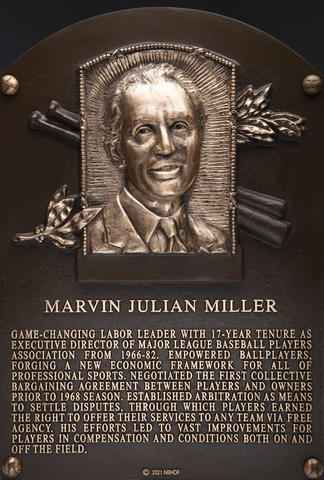 that at the end of Marvin Miller's tenure with the Players' Association the average salary for a major league baseball player had risen from $19,000 to more than $241,000?

"I don’t know of anyone who changed the game more than Marvin Miller. His legacy is that through his work, ballplayers for the first time attained dignity from owners. "
Robin Roberts