The National League, created in 1876, helped solidify professional baseball in the United States.

Morgan Bulkeley was its first president.

Bulkeley, whose ancestors arrived on the Mayflower, was the son of Eliphalet Adams Bulkeley, a co-founder of Aetna Insurance. While children of privilege often avoided war, even paying others to take their place, Bulkeley enlisted with the New York National Guard in 1861, joining the Union Army as a private. Assigned to Civil War service under General George B. McClellan, he would see action in the Peninsula Campaign, a battle fought in Virginia over the spring and summer months of 1862. The mission of the campaign was lofty – to capture Richmond, the capital of the Confederacy.

Ultimately, with General Robert E. Lee taking over the Confederate forces, the mission was unsuccessful, but Private Bulkeley served for the remainder of the war and then rejoined the worlds of business, finance, insurance and politics.

A drawing was held to determine the first president of the new league, and Bulkeley’s name emerged first. This sat well with William Hulbert and Albert Spalding of Chicago, who saw in him the integrity and character needed to drive the league’s acceptance.

But Bulkeley did not wish to devote his full energies to baseball and served only one season. Hulbert succeeded him, while Bulkeley continued his career heading Aetna and entered politics. He served four terms as Mayor of Hartford, and in 1888 was elected Governor of Connecticut. 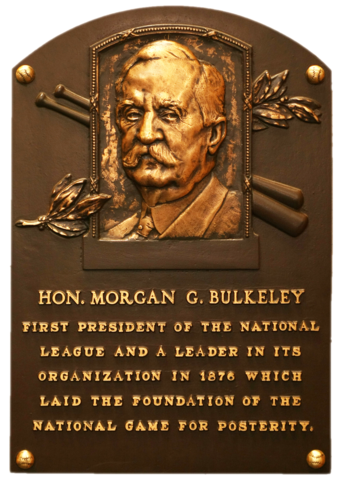 that during the Civil War, Morgan Bulkeley served under General George McClellan with the 13th New York Volunteers?

"Baseball isn’t the game that it was when I was a boy or when I was President of the National League. I know that it is a better game in many ways because it has developed from the good start we gave it. What I like about it is that it has not departed so much from the old way of playing that I cannot enjoy it. "
Morgan Bulkeley