Allan H. Selig grew up wanting to be another Joe DiMaggio – until the curveball derailed his on-field career.

But from the owner’s box and ultimately the commissioner’s office, the man known as “Bud” became a lifelong friend to the National Pastime – and left an imprint few can match.

Born July 30, 1934, in Milwaukee, Wis., Selig came of age as an ardent baseball fan, giving up the game on the field after “a guy…threw a curve at me and I backed two feet out of the box.” Selig attended games of the minor league Milwaukee Brewers and eventually the Braves when they moved to Milwaukee in 1953. By then, Selig was at the University of Wisconsin at Madison, majoring in American History and Political Science.

He graduated in 1956 and – after a tour in the U.S. Army – joined his father at his Ford dealership in nearby West Allis, Wis.

“Joe Torre said he bought his first car from me in 1960,” Selig said of the former Braves catcher and future Hall of Famer. “That’s true.”

By 1963, Selig was the largest public stockholder in the Milwaukee Braves.

But by 1965, the Braves had announced they were moving to Atlanta for the 1966 season, ending their 13-year run in Milwaukee. Selig sold his team stock and began work on bringing baseball back to his hometown even before the Braves had left.

After organizing successful exhibition games with MLB teams in Milwaukee, hosting regular season White Sox games at County Stadium and nearly acquiring the White Sox in 1969, Selig finally met his goal when he led a group that purchased the American League’s Seattle Pilots out of bankruptcy court on March 31, 1970. Seven days later, the new Milwaukee Brewers began their 1970 AL schedule.

Under Selig’s ownership, the Brewers grew into a powerhouse, winning the AL pennant in 1982 with a team that featured future Hall of Famers Rollie Fingers, Paul Molitor, Ted Simmons, Don Sutton and Robin Yount. Selig quickly became one of baseball’s most influential owners, helping identify and hire Peter Ueberroth as commissioner in 1984.

“He should have been Senate majority leader,” said White Sox owner Jerry Reinsdorf, describing Selig’s ability to lobby for his position and form alliances. That skill would be tested when on Sept. 9, 1992 – two days after commissioner Fay Vincent was let go by the owners – Selig was named the Chairman of MLB’s Executive Council, making him the de facto commissioner.

Selig was quickly thrust into the battle between labor and management, which culminated with the 1994 strike and the cancellation of that year’s World Series. But with Selig in command, baseball slowly returned to normal with the resumption of play in 1995 and several key events – like Cal Ripken’s chase of Lou Gehrig’s consecutive games played record – that restored the game’s popularity.

On July 9, 1998, the owners removed the “interim” tag and made Selig the game’s commissioner. Over the next 16 years, Selig – whose total tenure as commissioner was exceeded only by that of Kenesaw Mountain Landis – oversaw expansion in 1993 and 1998, the addition of two Wild Card teams, the creation of interleague play, MLB.com, the World Baseball Classic and the introduction of instant replay as a tool for umpires.

A $1.2 billion industry in 1992, the game’s annual revenues had grown to $9 billion by the time Selig left office in early 2015. He worked tirelessly to create revenue sharing policies that would benefit all teams, recognizing early in his tenure as commissioner that the game was growing and that all teams should benefit. In 2005, he launched the Commissioner’s Initiative on Sustainable Ballpark Operations, becoming the first professional sports league commissioner to create an initiative dedicated to promoting responsible environmental stewardship, which has now become standard practice in sports leagues throughout the United States and the world.

Under Selig, MLB enjoyed 20-plus years of labor peace following the 1994-95 strike and experienced a ballpark boom that featured almost two dozen new stadiums. Selig retired Jackie Robinson's No. 42 throughout baseball in 1997 and oversaw the league's expansion into three divisions per league and helped establish the toughest anti-drug measures in all of sport. 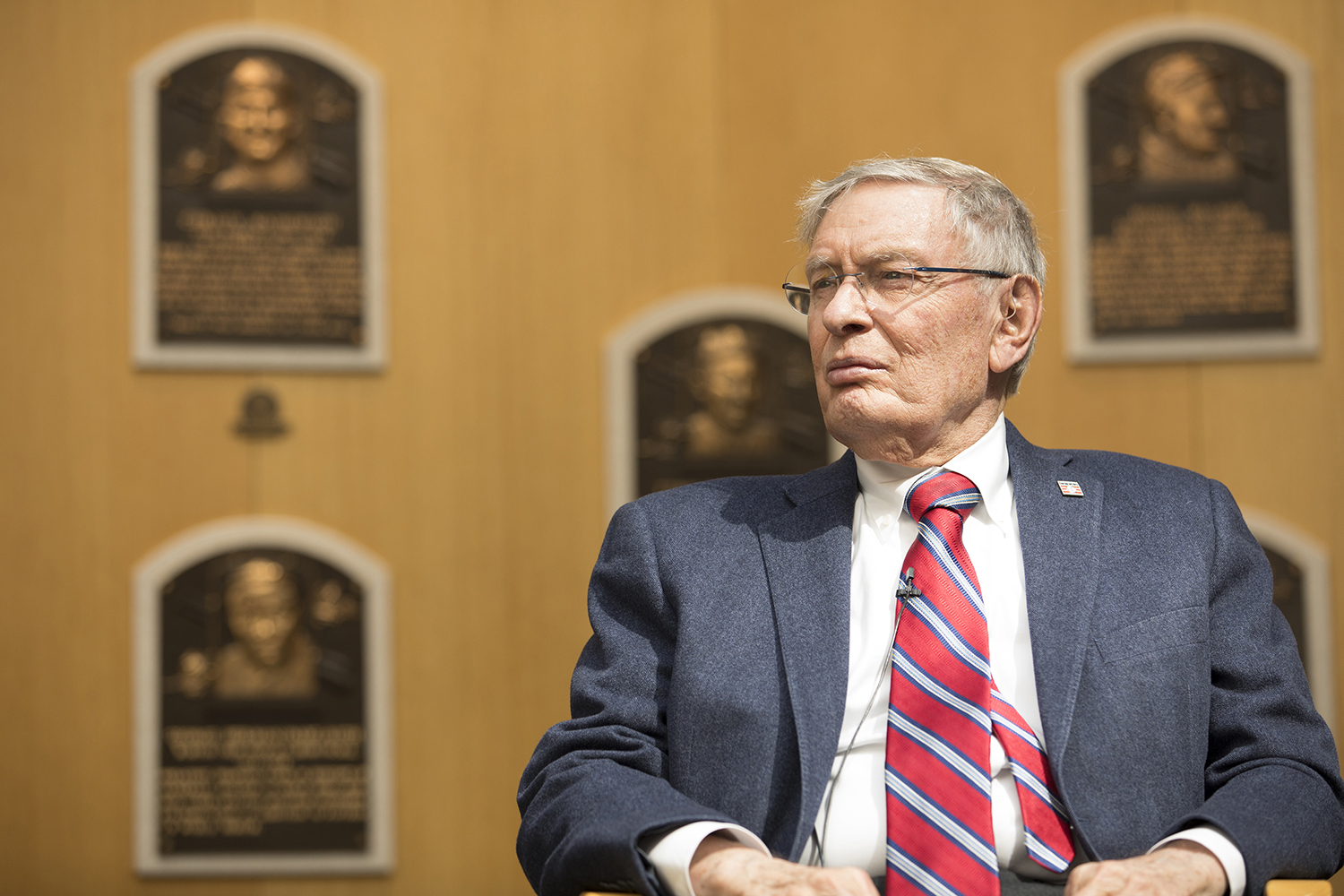 Bud Selig ‘overwhelmed’ by visit to Hall of Fame