Alexander Joy Cartwright, Jr. was one of seven children born to a New York City sea merchant in 1820. At age 16, he began work as a bank clerk and played bat and ball games after hours with local volunteer firefighters. It is believed that Cartwright and his friends formed their baseball club in the early 1840s and named it after Manhattan’s volunteer Knickerbocker Engine Company.

In 1845, Cartwright’s Knickerbockers moved across the Hudson River via ferry to play on the spacious Elysian Fields in Hoboken, N.J. It was there that the club became a driving force in baseball’s rapid development. Cartwright served as the Knicks’ secretary in 1846 and then as their vice president from 1847-48. He was also a member of the club’s rules committee in 1848.

In 1849, Cartwright left New York to join the Gold Rush in the western territories. Later that year, he sailed to Hawaii where he would spend the rest of his life. He became a prominent citizen in Honolulu, serving as the city’s first fire chief and as a trusted advisor to Queen Emma of Hawaii. He also helped found the Honolulu Library and Reading Room, notably advocating for women to be included among the library’s patrons. He continued a life of civil service until his death on July 12, 1892, after which his grave became a popular visiting site for many baseball luminaries – including Babe Ruth in 1934.

Cartwright was elected to the Hall of Fame in 1938. 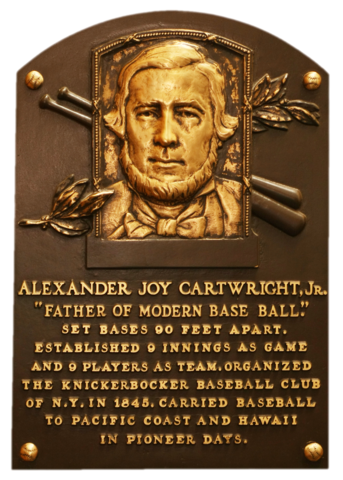 that Alexander Cartwright left New York in 1849 and eventually settled in Hawaii where he became fire chief of Honolulu during the 1850s?

"Ninety feet between the bases is the nearest to perfection that man has yet achieved. "
Red Smith