With 145 wins to his credit and an early retirement from professional baseball at age 28, William Arthur “Candy” Cummings does not possess a typical Hall of Fame resume for a pitcher.

However, despite Cummings’ short career, he is often cited with the invention of a new pitch called the “curveball” that made him one of the most influential pitchers in baseball history.

It began on a Brooklyn beach one day in 1863, when the 14-year-old Cummings was throwing sea shells into the Atlantic Ocean. Cummings and his friends found that they could easily make flat, circular shells curve in the air.

“We became interested in the mechanics of it and experimented for an hour or more,” Cummings later recalled. “All of a sudden, it came to me that it would be a good joke on the boys if I could make a baseball curve the same way.”

At 5-foot-9 and 120 pounds, Cummings found his new pitch could help him thrive against bigger and more powerful players. As he constantly tinkered with his grip and release from his underhand throwing motion, Cummings saw his curveball begin to pay dividends. In 1865, the 17-year-old posted a remarkable 37-2 record for the Brooklyn Star Junior amateur team. He was so dominant that his teammates called him “Candy,” which was a popular Civil War-era nickname for a man who was the best at his craft.

Later that year, Cummings was invited to join the Brooklyn Excelsiors, one of the premier clubs in America at the time.

“The pitching and general play of young Cummings in this match marks him as a future Excelsior player of note,” wrote Hall of Fame sportswriter Henry Chadwick in 1866. The following season, Cummings’ curveball finally developed the break he was looking for in a game against Harvard.

“When [a Harvard batter] struck at the ball it seemed to go about a foot beyond the end of his stick,” Cummings recalled. “I tried again with the same result, and then I realized that I had succeeded at last.

“A surge of joy flooded over me that I shall never forget,” Cummings continued. “I said not a word, and saw many a batter at that game throw down his stick in disgust. Every time I was successful I could scarcely keep from dancing with pure joy.”

As one of the few pitchers in America with a curveball in his arsenal, Cummings rapidly became one of the game’s most dominant hurlers. In 1871, Chadwick named Cummings the most outstanding ball player in the United States. The following spring, Cummings attracted offers from three National Association clubs before beginning his professional career with the New York Mutuals. At age 23, Cummings finished 53 of 55 starts for the Mutuals and compiled a 33-20 record on the mound.

Garnering increasingly high contract offers, Cummings pitched for four different teams over the next five seasons, averaging 22 wins with a 2.25 ERA. On Sept. 9, 1876, Cummings made history again as the first pitcher to record two complete game victories in the same day.

By the end of the 1877 season, a handful of pitchers had successfully learned how to throw Cummings’ curve – and hitters began learning how to hit it. Cummings left the National League that winter to become the first president of the new International Association. He would pitch sporadically until his final retirement in 1884.

“But my idlest dreams of what a curved ball would do, as I dreamed of them that afternoon while throwing clam shells, have been filled more than a hundred times,” Cummings recalled. “At that time I thought of it only as a good way to fool the boys, its real practical significance never entering my mind.

“I get a great deal of pleasure now in my old age out of going to games and watching the curves, thinking that it was through my blind efforts that all this was made possible.”

In 1939, Cummings and his curveball were honored with his election to the Hall of Fame. 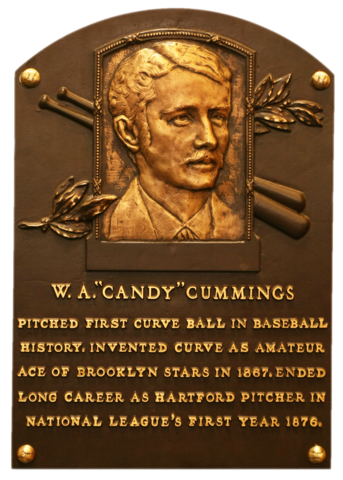 that Candy Cummings was named the first president of the International League in 1877?

"A surge of joy flooded over me that I shall never forget. I felt like shouting out that I had made a ball curve. I wanted to tell everybody -- it was too good to keep to myself. "
Candy Cummings