J.L. Wilkinson was the principal owner of the Kansas City Monarchs from 1920-48, one of the most dominant Negro Leagues teams ever assembled.

Wilkinson’s Monarchs also won two of four Negro World Series in which they played. They won the first Series in 1924, defeating Hilldale of the Eastern Colored League. And they won the initial Series when the competition resumed in 1942, beating the Homestead Grays.

From 1931-37, when African-American baseball was facing financial challenges, Wilkinson turned the Monarchs into a pure barnstorming club, drawing on their substantial popularity in the Midwest. To enable the team to play additional games at night in addition to their daytime schedule, Wilkinson purchased a portable lighting system, trucking it along behind the team bus when the Monarchs hit the road.

Wilkinson began his baseball career in his home state of Iowa as a pitcher until he hurt his arm. He then became a baseball entrepreneur, first in 1909 with a traveling women’s team.

In 1912, he organized the All Nations squad in Des Moines. The team, which had players from several ethnic backgrounds, was a top barnstorming club until the military called many players to serve during World War I. By then, Wilkinson had made Kansas City his base – and reorganized his team as the Monarchs after the war. 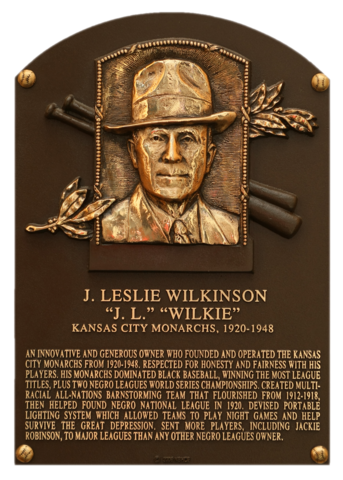 that prior to the Monarchs, J.L. Wilkinson owned one of the first all-girls barnstorming teams, as well as the multi-ethnic All-Nations squad?

"He was a considerate man; he understood; he knew people. Your face could be as black as tar; he treated everyone alike. He traveled right along with us. "
Newt Allen