Although he spent his entire career playing either in Cuba or the Negro Leagues of North America, José Méndez often faced AL/NL competition in exhibition games. And he regularly bested some of the game's biggest stars like Christy Mathewson and Eddie Plank.

After a 1911 tour of Cuba, Philadelphia Athletics catcher Ira Thomas said: “More than one big leaguer from the states has faced him and left the plate with a wholesome respect for the great Cuban star. It is not alone my opinion but the opinion of many others who have seen Méndez pitch that he ranks with the best in the game.”

Nicknamed “The Black Diamond,” the Cuban-born hurler had a lean, wiry frame, with a deceptively hard fastball and a sharp curveball. He was also able to keep hitters off balance because of his ability to change speeds so well.

Arm trouble in 1914 forced Méndez to reinvent himself as a shortstop. Over the years Méndez played for several teams and returned to the mound from time-to-time, but it was not until the 1924 Negro Leagues World Series that Méndez’s pitching arm would again feature prominently. Pitching for the Kansas City Monarchs, Méndez went 2-0, with a 1.42 ERA in four pitching games in the series and leading the Monarchs to the Negro Leagues World Series championship.

In her memoirs, Mrs. John McGraw recalled how her husband, whenever Méndez pitched against the Giants, would express regret about the ban that kept Méndez out of the big leagues: “Without mincing words, John bemoaned the failure of baseball, himself included, to cast aside custom or unwritten law, or whatever it was, and sign a player alone, regardless of race or color.” 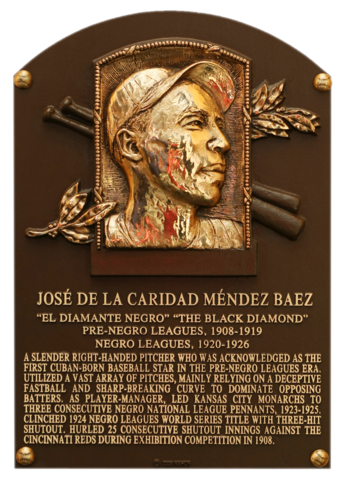 that José Méndez was not only an outstanding pitcher but also an accomplished musician? He could also play the cornet, clarinet and guitar.

"The first time I met Méndez was in Chicago, and boy, could he throw a ball! He had developed tremendous shoulders and biceps from chopping sugar cane. That ball was hopping. It looked like a pea coming up there. "
Arthur Hardy